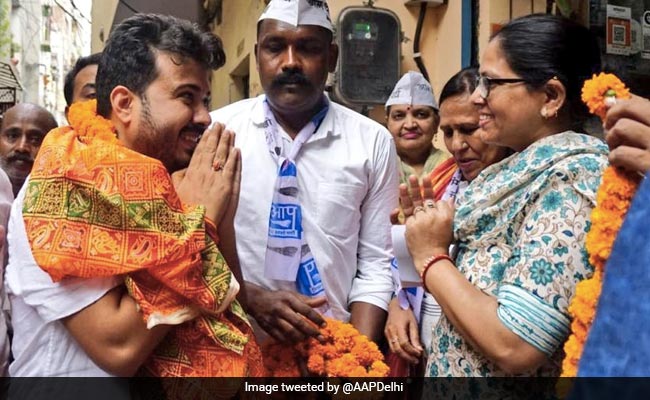 No immediate reaction was available from the AAP over Delhi BJP chief’s charges. (FLE)

The Delhi BJP on Saturday charged the AAP with roping in children for campaigning in Rajinder Nagar Assembly bypoll, with its  state president Adesh Gupta demanding child rights body NCPCR to take action against the party candidate Durgesh Pathak.

The Election Commission should take action against “Aam Aadmi Party, which is using innocent children to campaign” for its candidate, Mr Gupta said.

No immediate reaction was available from the AAP over Delhi BJP chief’s charges.

Mr Gupta alleged “the Aam Aadmi Party has lowered its level to win the Rajinder Nagar Assembly by-election by using children to campaign for its candidate, by giving them money.” In a tweet, he requested the Election Commission to take cognizance of the video shared by him and take action against the AAP and its candidate Pathak under the Child Labour (Prohibition and Regulation) Act.

He also demanded the Chairman of the National Commission for Protection of Child Rights (NCPCR) to act against AAP candidate Pathak, whom he accused of made “political use” of children in his election campaign while being a member of the Delhi Child Development Commission.

The BJP has fielded Rajesh Bhatia as its candidate in the Rajinder Nagar bypoll. The Congress has fielded Prem Lata.

Voting for the bypoll will be held on June 23. The result will be announced after counting of votes on June 26.

The bypoll was necessitated after election of sitting AAP MLA Raghav Chadha to Rajya Sabha from Punjab.