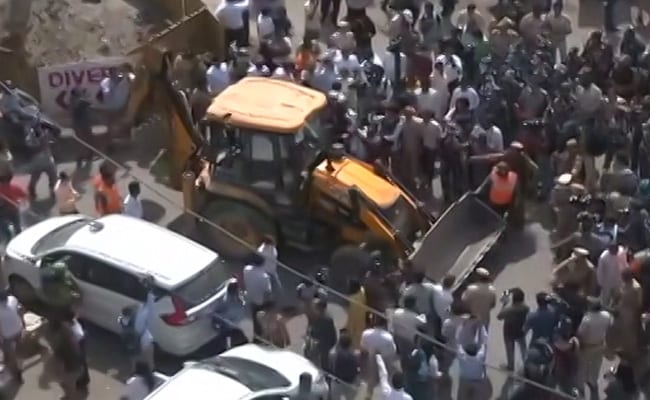 Nine bulldozers rolled in and razed several structures today in Delhi’s Jahangirpuri area, days after communal clashes broke out in the locality during a Hanuman Jayanti procession.

The anti-encroachment drive was carried out by the BJP-controlled North Delhi Municipal Corporation amid heavy police presence in the area to prevent any law and order situation.

The exercise comes after Delhi BJP chief Adesh Gupta wrote to the mayor of the civic body, asking him to identify illegal constructions of “rioters” in the area and demolish them.

Raja Iqbal Singh, mayor of North Delhi Municipal Corporation, has termed it a “routine exercise”, reported news agency PTI. However, the timing of the drive, especially since it comes right after the BJP’s chief letter, has prompted questions on political motives are behind the drive.

This morning, Special Commissioner of Police Dependra Pathak and other senior officers took stock of the area ahead of the eviction drive. “Adequate force is on ground to supervise the encroachment drive,” Mr Pathak told reporters.

The civic body yesterday sought a force of at least 400 police personnel for the two-day anti-encroachment drive that started today, PTI reported.

In its letter to the police, the municipal corporation has said a joint anti-encroachment programme comprising the Public Works Department, Health and Sanitation Department and others are scheduled in Jahangirpuri.

“You (police) are therefore requested to provide at least 400 police personnel including lady police/outer force for maintaining law and order during the encroachment removal action on April 20 or April 21 (9.30 am onwards) as per your convenience for three days,” the North Corporation’s Assistant Commissioner said in the letter to the police.

According to the police, the clashes broke out when a Hanuman Jayanti procession that did not have permission took a route alongside a mosque. The “shobhayatra” was passing by the mosque, with religious music blaring, around the same time as the azaan or Muslim call to prayers. Two groups started arguing and eventually, both sides threw stones at each other and shots were also fired.

Nine people, including eight policemen, were injured in the incident.

A total of 25 people have been arrested so far in connection with the violence.

The ruling Aam Aadmi Party and the BJP have been engaged in a blame-game over the violence. Ansar, the main accused in the violence, is at the centre of the escalating political fight, with the BJP and the AAP accusing each other of links with him.

The police have said there is no evidence so far that the violence on Saturday was planned. “So far, the probe does not suggest this (that it was planned). As of now it looks like it was all impromptu but now investigation is being done by the Crime Branch,” Mr Pathak told NDTV.

Right-wing groups allege that the clashes were planned. Vishwa Hindu Parishad (VHP) leader Prem Sharma, after being questioned by Delhi Police, had said that the violence was planned and that was why so many bricks were stored on the rooftop of the mosque.