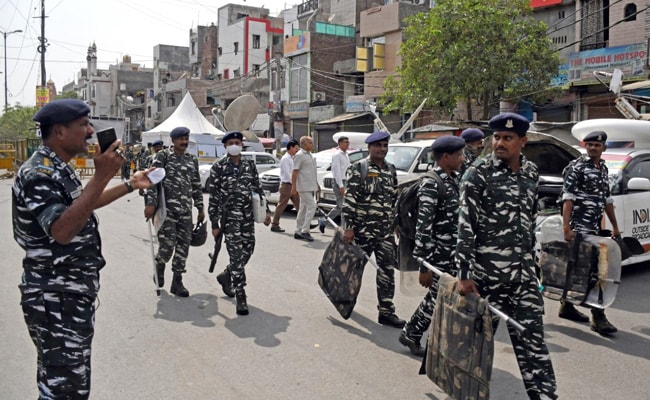 Police patrol a road in Delhi’s Jahangirpuri, where violence broke out (PTI)

There is no evidence so far that the violence at Delhi’s Jahangirpuri on Saturday was planned, a top police officer said today in the middle of a political blame-game over who caused the clashes.

“So far, the probe does not suggest this (that it was planned). As of now it looks like it was all impromptu but now investigation is being done by the Crime Branch,” Depender Pathak, Special Commissioner of Delhi Police (Law and Order) Northern Range, told NDTV.

According to the police, the clashes erupted when a Hanuman Jayanti procession that did not have permission took a route alongside a mosque. The “shobhayatra” was passing by the mosque, with religious music blaring, around the same time as the azaan or Muslim call to prayers. Two groups started arguing and eventually, bricks were thrown at the procession.

Right-wing groups allege that the clashes were planned. Vishwa Hindu Parishad (VHP) leader Prem Sharma, after being questioned by Delhi Police, had said that the violence was planned and that was why so many bricks were stored on the rooftop of the mosque.

Mr Pathak said the police had conducted fair investigations and key players had been arrested but as the probe is in the initial stage, there was no definite conclusion.

Three processions were taken out through the dense Delhi locality that day.

“The third procession had about 400 participants and 70 per cent had gone past the mosque. At the fag end, youngsters participating in the yatra took out swords and started flashing them; that’s what trigged violence,” Mr Pathak said.

The third procession had maximum participants, according to the police.

“The first two had about 100-150 participants. They had written permission too as they had submitted their application for permission on March 25 and March 31. But as far as last procession is concerned, they had applied just a day before the violence and they were not granted permission,” the police officer said.

Four cases have been filed and 24 have been arrested. Three minors are also in custody. Mr Pathak said among those arrested, eight are Hindus and the rest are Muslims.

“All arrests are based on evidence. We have made recoveries also from the accused, so our case is foolproof,” he added.

Gurugram Man Shoots At Woman For Refusing To Marry Him