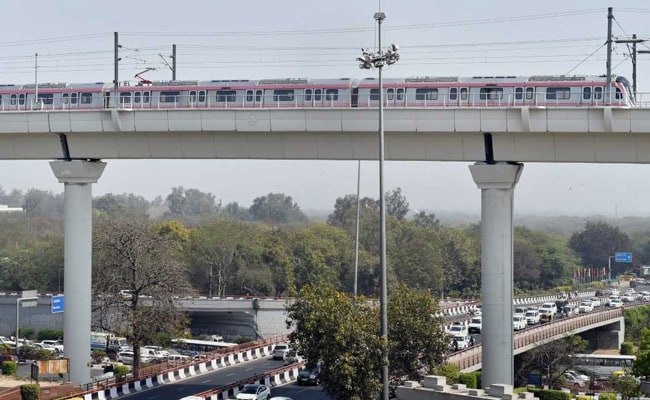 Ahead of opening of the Pink Line segment at Trilokpuri on August 6, the Delhi Metro Rail Corporation (DMRC) on Thursday urged passengers to travel during peak hours only when it is absolutely essential to avoid crowding amid the ongoing coronavirus pandemic.

The Delhi Metro, in a statement, said with almost the entire fleet of DMRC, about 2,000 coaches, in operation, the total sitting capacity available is only about one lakh (50 in each coach). During peak hours, everyday more than two lakh passengers come to the metro stations.

Following the relaxations in Covid safety norms, the Delhi Metro is running with full seating capacity from July 26, with still no provision for standing travel for commuters.

Further, not all gates of stations are opened for entry. Only one gate on stations having less footfall and two gates at busy stations are being opened. From time to time, it has been clarified the reason for the above situation and it is once again clarified that though almost the entire fleet of trains are being put into operation by the DMRC, yet due to current guidelines only sitting is allowed inside the trains leading to reduced carrying capacity, it added.

“Thus, in view of the current restrictions which permit metro to offer only limited number of passengers, the DMRC once again advice and appeals to the general public to travel during peak hours only when it is absolutely essential and as far as possible plan the journey during off-peak hours to avail better capacity than peak hours, avoiding long queues,” it said.

At present, long queues of passengers are noticed outside the metro stations and passengers have to wait outside stations before they are allowed to enter, the urban transportation said.

More gates opening will only cause “crowding and violations of social distancing norms” inside the trains and stations, the statement said.

“Recently, random incidents have also been reported from across the network during peak hours wherein, impatient passengers have tried to barge into metro stations breaking the queues, opening or damaging gates forcibly, manhandling DMRC and CISF personnel on duty, in abundant violation of Covid-appropriate behaviours,” it added.

Such acts not only cause law and order issues but also put lives of co-passengers and metro officials at risk besides increasing the risk of COVID-19 spread, the statement said.

The advisory assumes significance as from 3 pm onwards on Friday, the Pink Line segment between Trilokpuri-Sanjay Lake and Mayur Vihar Pocket-1 will be opened for passenger services after its inauguration in the morning.

Pink Line is all set to become the DMRC’s longest operational corridor from Friday onwards which would also save time and money for commuters as after much delay the Trilokpuri gap on the line has been plugged. The Majlis Park-Shiv Vihar corridor or the Pink Line spans 38 stations. Pink Line was opened in multiple phases in 2018. And, all stations on the line have been opened.