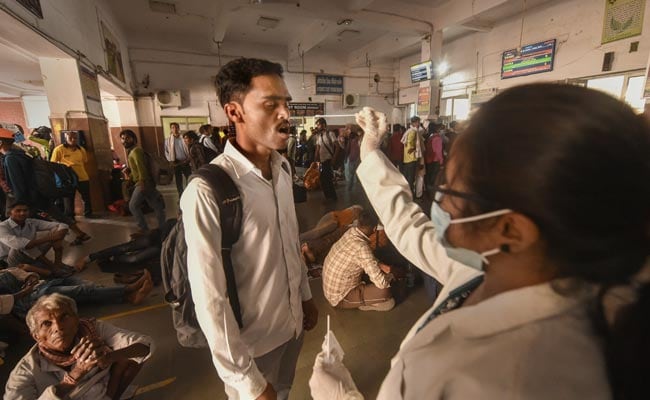 This is the fourth consecutive day that Delhi has recorded over 1,300 Covid cases in a day. (File)

Delhi recorded 1,534 new Covid cases and three deaths on Saturday, while the positivity rate stood at 7.71 per cent, according to data shared by the city health department.

On Friday, the national capital had logged 1,797 coronavirus cases, the highest in nearly four months, along with one fatality while the positivity rate stood at 8.18 per cent.

The fresh cases came out of 19,889 Covid tests conducted the previous day.

This is the fourth consecutive day that Delhi has recorded over 1,300 cases in a day. The capital has logged more than 1,000 daily cases for the fifth day on the trot.

Friday’s figures were the highest since February 4, when the national capital logged 2,272 cases and 20 deaths while the positivity rate had stood at 3.85 per cent.

The national capital recorded 1,323 new Covid cases and two deaths on Thursday, while the positivity rate stood at 6.69 per cent.

The fresh cases pushed Delhi’s coronavirus cases to 19,20,559 while the number of casualties rose to 26,229, the department said in its latest bulletin.

Delhi had reported 1,422 fresh COVID-19 cases and zero casualty on May 8, while the positivity rate was recorded at 5.34 per cent.

The city on May 1 had reported 1,485 fresh COVID-19 cases and zero fatality due to the viral disease, while the positivity rate was recorded at 4.89 per cent, according to official data.

Despite the rise in the positivity rate, the city government is not implementing graded response action plan (GRAP) devised by the Delhi Disaster Management Authority since the hospital admissions are low.

The GRAP came into force in August last year, stipulating measures to be taken by the government in accordance with the positivity rate and bed occupancy for locking and unlocking of various activities.

Out of 9,506 hospital beds, 241 are occupied, up from 222 the previous day, while none of the beds at Covid Care Centres and Covid Health Centres are occupied.

The number of active COVID-19 cases in Delhi increased to 5,119 from 4,843 on Friday, the latest bulletin said.

As many as 3,370 patients are under home isolation, up from 2,850 the previous day, it said, adding that there are 229 containment zones in the national capital.

The number of daily COVID-19 cases in Delhi had touched the record high of 28,867 on January 13 this year during the third wave of the pandemic.

The city had recorded a positivity rate of 30.6 per cent on January 14, the highest during the third wave of the pandemic. Experts have said people lowering their guard and travelling during the vacation season are the main reasons behind the latest upward trend in coronavirus cases in Delhi.