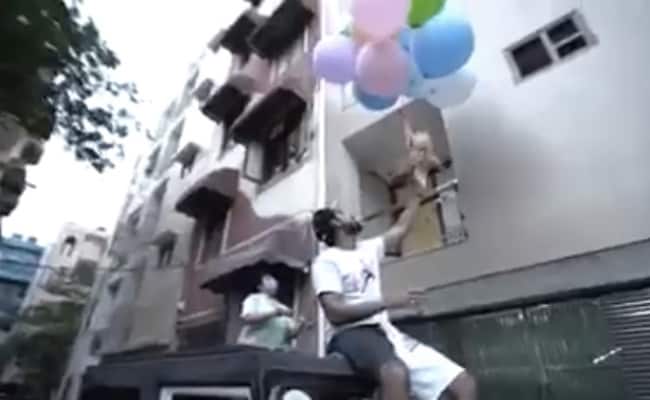 The now-deleted video shows the YouTuber flying his pet dog with hydrogen balloons.

A Delhi-based YouTuber has been arrested for making his pet dog float up in the air by tying hydrogen balloons on its back. The man, whose channel is called “GauravZone”, had recently uploaded the video which created huge outrage online.

The now-deleted video shows the YouTuber, a few others and Dollar, his pet dog, in a park. A bunch of colourful hydrogen balloons are tied to the dog’s upper body. “The upper body has started flying a little,” Gaurav explains as he demonstrates the act, pulling up the string of balloons, further lifting the dog.

He then nudges the dog to run, saying it will fly up in the air if it runs. A woman too is seen holding the pet. Guarav says they have tied two more balloons to it and that this could make it float. In moments, the dog is seen floating away before the woman manages to catch hold of it.

In the same video, the YouTuber sits on top of a four-wheeler in a narrow street and flies Dollar up in the air using hydrogen balloons. The dog is seen floating up to  a balcony on the second floor of a building.

A case has been registered against Gaurav, who has over four million subscribers on YouTube, and his mother, in south Delhi’s Malviya Nagar police station under various sections of the law.

Three days ago, he had put out an apology video, explaining why he delieted the ‘flying dog’ video. He said he had taken “all safety measures” before flying his pet.

Apologising to his viewers and animal lovers, he said he treats his pet” like a child”. “I apologise if you felt bad after watching the Dollar video. I won’t try such things again. Those who’re getting influenced by such things, please don’t get influenced. If sentiments have been hurt, I truly seek your apology.”

Hardik Pandya Shares Photo Of Him “Chilling In The Clouds”. See Pic