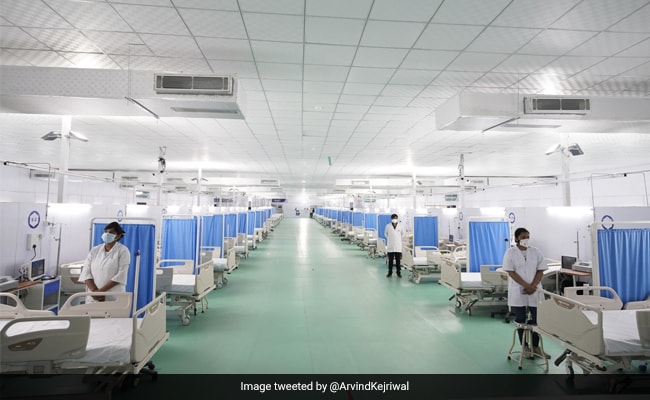 Starting Saturday, the hospital will be functional with 250 beds; the rest will be operational two days later, said Mr Kejriwal after visiting the facility today.

“I salute our docs, engineers and workers who worked round the clock on war footing and constructed these 500 ICU beds in just 15 days at Ramlila maidan opp LNJP hospital. 250 ICU beds start tomo and 250 in next two days,” tweeted Mr Kejriwal.

I salute our docs, engineers and workers who worked round the clock on war footing and constructed these 500 ICU beds in just 15 days at Ramlila maidan opp LNJP hospital. 250 ICU beds start tomo and 250 in next two days. pic.twitter.com/Ufo4udyaUg

The city recorded 8,500 fresh COVID-19 cases in the past 24 hours, the first time the figure has dipped below 10,000 since April 10. The city’s test positivity rate has also dipped to 12 per cent, Mr Kejriwal said during a digital press conference.

Around 3,000 beds have cleared up in the past 10 days, he said, indicating that the second wave was easing in the city.

He said, however, that the number of patients in critical condition remains considerable because the ICU beds have not been freed up much.

The Chief Minister added new oxygen beds were being made, cylinders were being bought, and ICU beds being prepared.

Earlier on Tuesday, Mr Kejriwal said there will be no shortage of ICU or oxygen beds in Delhi after opening of a 500-bed facility at the city’s Guru Teg Bahadur Hospital.

“Coronavirus cases are going down in Delhi… so is the second wave. With your co-operation the lockdown was successful and we’ve increased the number of oxygen beds in the past few days. Yesterday we set up 500 new ICU beds near GTB Hospital,” the Chief Minister said.

“Now there is no shortage of ICU and oxygen beds in Delhi,” he added.

Just a few weeks ago, patients were struggling to get admitted to hospitals and health facilities sending SOS about the dire shortage of medical oxygen.

Delhi is under lockdown till May 17 to break the chain of transmission.