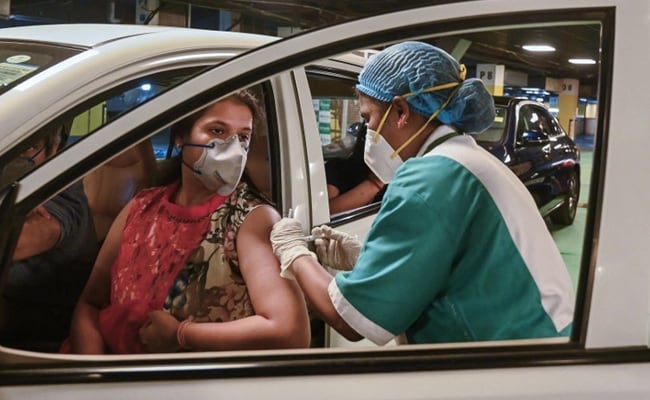 Delhi’s highest ever record remains 1.23 lakh vaccinations on May 13. (File)

A major change in Delhi’s vaccination drive has helped the national capital record its highest vaccinations in a month.

From today, the Delhi government has allowed the walk-in vaccinations for people over 18 years at over 40 government vaccination centres across the city.

According to the centre’s guidelines, walk-in vaccinations can be allowed at government centres for 18+ but not at private ones. For 40-year-old Subhash Kumar Manghi and his wife, 36, Anokhi Devi it made vaccination accessible. They got vaccinated at a government school in South Delhi’s Chirag Enclave area. Mr Manghi is the sole working member of his family of five which includes three teenage children. As a small time vendor of helmets, he earns barely Rs 7,000 a month.

Subhash Kumar Manghi said, “It is easier to get vaccinated through walk-in system. We don’t have a computer. We are too poor to buy one and can’t book slots on CoWin. We are glad that we got vaccinated for free at a government centre. I would have not been able to afford the vaccine at a private centre. We live on a hand to mouth basis.”

The in-charge of the centre- Yogesh Kumar Adya, Executive Magistrate of Hauz Khas Division said, “We will be vaccinating 600 people daily at this centre. Half of the slots are reserved for walk-ins and the other half are reserved for those who come with pre-registration on CoWin. There are 3 vaccination sites that we have setup within the premises of the school. 200 beneficiaries will get the jab at each site. Our teams had been working on the ground for the last few days to create awareness about the walk-in system. As a result, we have received an immense response. But we are maintaining social-distancing norms at all points.”

On Wednesday, vaccinations were conducted at a total of 1,063 vaccination sites in Delhi. 947 of these were at government centres while 116 were at private centres.

Rakhi Verma who got vaccinated at a private hospital in South-West Delhi said, “I preferred coming here as private centres take more precautions and things are more organised here. If there is a side-effect then I will immediately get to the doctors.”

Delhi carried out over 76,000 vaccinations on Monday and nearly 85,000 on Tuesday but has complained of stock shortage as it has only about two days supply of Covaxin left for the 18-44 age group.

The Delhi government was earlier accused by Union Health Minister Dr Harsh Vardhan and Union Urban Development Minister Hardeep Puri of not vaccinating enough people on Monday, at a time when other states broke records and India achieved over 88 lakh vaccinations. But Delhi government refuted the allegations.

Satyender Jain, Delhi Health Minister, today said,  “BJP is saying ‘Why didn’t you vaccinate more people on Monday?’.  But in Delhi, 75-80,000 vaccinations are done daily. On the other hand in Madhya Pradesh, even 1% of the vaccinations done on Monday could not be done on the next day. Is it better to vaccinate properly only once in a month or throughout the month?”

He added that Delhi was currently facing a crisis of vaccine stock but he hopes that it will end in a few days.

Delhi reported 111 new coronavirus cases in the last 24 hours with a positivity rate at a record low of 0.15 per cent. On Tuesday, the capital had recorded 134 cases.