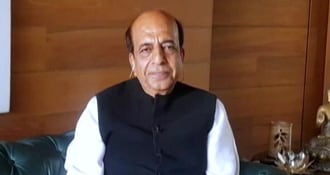 BJP leader Dinesh Trivedi, once a senior member of Bengal’s ruling Trinamool Congress, today made a direct attack at Chief Minister Mamata Banerjee over the arrest of her since-sacked minister Partha Chatterjee in a corruption scam. “As CM, if you did not know what was happening to your otherwise most-trusted colleague, then I think it is incompetence. And if you knew what was happening, then you’re part of it,” Mr Trivedi, who left the Trinamool early last year, said while speaking to NDTV. “Bengal deserves better,” he added.

On whether he is suggesting Ms Banerjee should resign, he said, “I am nobody to suggest anything.” But he also said, “When Lal Bahadur Shastri was Railway Minister, he resigned after a train accident… He was not the engine driver. He felt, (for) morality, he should resign.”

But Trinamool MP Santanu Sen countered later, saying, “Show me one instance where the BJP has taken action against any of their leaders. Mamata Banerjee has already removed Partha Chatterjee from the cabinet and suspended him from the party.”

Ms Banerjee took the action yesterday, six days after Mr Chatterjee was arrested on July 23 along with an associate, actor Arpita Mukherjee, for alleged corruption in hiring teachers and other staff when he was Education Minister in 2016. The Enforcement Directorate (ED) has seized Rs 50 crore from Ms Mukherjee’s flats — visuals of cash and gold bars have gone viral.

Dinesh Trivedi said he is “not surprised, but sad” as his stance of quitting the TMC has been “vindicated”. “When we formed the party, we had the spirit of the people. But when contractors started coming in and running it, the spirit of ‘Maa-Mati-Manush’ (‘motherland and people’) was substituted by money, lust and greed,” the former union minister said. He called for political change: “This is a great opportunity to clean up the politics of Bengal… Common people will be out on the street and a quiet revolution is going to take place.”

But Santanu Sen later said to NDTV that Mr Trivedi “has lost his mental balance” because “he hasn’t been given anything that the BJP promised”.

“Dinesh Trivedi lost the 2019 Lok Sabha election, yet our leader sent him to the Rajya Sabha. She earlier made him Railway Minister. He was given some false promises by the BJP that he’d be made a minister if he leaves the Trinamool. He’s now upset as that hasn’t happened,” Mr Sen added.

On whether action against Partha Chatterjee absolved the Trinamool Congress, Mr Sen said, “What more can we do, you tell me. From the first day our stand is clear, that the lady from whose house the money was recovered… she has nothing to do with our party. The money that was recovered has got nothing to with the party.”

“We demand that the ED should complete the investigation impartially, neutrally and quickly. Previous record says ED takes 8-9 years to complete investigations. When the final result comes, decisions will be taken,” he further said.

Trinamool leader Abhishek Banerjee has also said there should be “time-bound probe and strict action” against those involved in corruption, but stressed that Ms Mukherjee isn’t associated with the party. About Partha Chatterjee — whose suspension he announced — he said yesterday, “In a hypothetical way… If Partha Chatterjee goes to the BJP after two months, he will become a saint. Since he is in TMC, all these things are happening.”