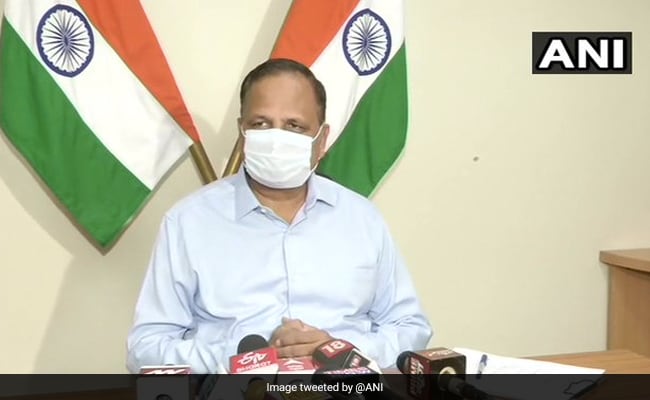 Delhi Health Minister Satyendar Jain said there seems like a straight result of the lockdown.

The fall in count of daily COVID-19 cases and the shrinking positivity rate in Delhi can be attributed to the implementation of lockdown in the national capital to combat the pandemic, Health Minister Satyendar Jain said on Wednesday.

Interacting with reporters, he also said about 600 cases of black fungus or mucormycosis have been reported here till date, with over 200 being recorded alone on May 23.

“Yesterday, 1,568 cases were recorded with a positivity rate of 2.14 per cent. Today’s bulletin will come soon and the two numbers have further fallen. This seems like a straight result of the lockdown,” he said.

The minister said the number of beds available are also in large number now and about one-third of the ICU beds are also vacant.

The lockdown in Delhi amid the ongoing second wave of the coronavirus pandemic was imposed on April 19, which the government has successively extended and recently it was done till May 31.

Medical experts recently had attributed the lockdown as the main factor when the first dip in daily cases had been recorded in mid-May amid the second wave of the pandemic, while cautioning that “severity of cases was still the same as before”.

Mr Jain, when asked about the death of large number of doctors in the second wave, including in Delhi, said any death is unfortunate and added that about 10,000 lives have been lost due to Covid during the second wave here.

On black fungus cases, he said, on May 23 over 200 cases of mucormycosis were reported in a day and then about 100 cases were recorded per day. About 600 cases have been recorded in total till date, he added.

“Both private and government facilities are treating black fungus cases. But issue is of injections needed for the patients. Each patients needs about six in a day. We had received 370 of these yesterday and then about 400. We appeal to the Centre again to augment its supply,” he said.

On workers at crematoria and graveyard seeking frontline workers status, Mr Jain said, “We will consider it”.

Asked about reported closure of many mohalla clinics during the second wave of the pandemic, he said, “Barring 10-15 clinics, which were closed temporarily due to emergency reasons like duty doctors having got infected with Covid, all other facilities are working.

On shortage of Covid vaccine, Mr Jain said, “We are being forced to go for global tenders but companies are not giving directly to us. They (Centre) are shifting responsibilities

Hardik Pandya Shares Photo Of Him “Chilling In The Clouds”. See Pic