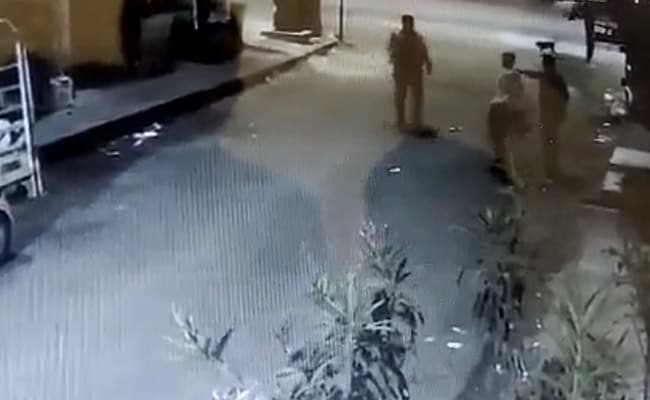 Police sources say Vignesh threw a knife at them during the chase.

More than a week after a 25-year-old man died after allegedly being beaten up at a police station in Chennai, an unverified CCTV video has surfaced leading to claims and counterclaims over alleged police torture. NDTV cannot verify the authenticity of the tape.

The 1.26-minute-long night video shows a man – who police sources say is Vignesh – running from the main road in Chennai’s Kellys area to a narrow street and falling down as he is chased by two cops. The cops later arrest the man and beat him once with what appears to be a police baton.

As the police personnel take him into custody, one cop is seen picking up something from the ground, which police sources claim was a knife Vignesh threw at them during the chase.

The police claim, however, have been questioned by a human rights organisation that is keenly following the case.

“This is just one camera. There are at least 15 cameras, but police have ensured nothing works. The man was tortured for three hours from 11 PM. Though the CB-CID took over on April 21, not a single summon was issued to us. Why is the magistrate quiet? Judicial Magistrate’s role is sacred in cases of suspicious deaths,” Henri Tiphangne, Director of People’s Watch a human rights organisation that has taken up this cause, told NDTV .

Police sources say this is the video they had submitted to the court.

Explaining the sequence of events, a member of the investigation team told NDTV, “This is the spot where Vignesh attempted to attack police throwing a knife. A frame-by-frame analysis of Vignesh’s body movement in the footage would indicate, the man using his hand to throw the knife without turning back and that’s when he lost balance and fell”.

Police say Vignesh who was travelling in an auto was found in possession of cannabis (ganja) and he attempted to attack police with a knife and escape. It was then that he was chased and arrested, the police officials say. The next morning Vignesh, who used to ride horses on the beach for joy rides, reportedly suffered seizures and could not be saved despite medical help, they said.

The family’s suspicion of foul play strengthened after the police reportedly donated Rs 1 lakh to them.

Two cops – an SI and a constable – have been suspended.

The state government had transferred the investigation to the CB-CID.

Chief Minister MK Stalin, who announced Rs 10 lakh rupees relief to the family, has promised a fair investigation into the case.

Responding to the opposition and allies, who raised the issue in the state assembly, he said, “Whether our party, the DMK, is in power or not, the party is firm that custodial deaths ought to be probed thoroughly and that appropriate action should be taken against those responsible”.