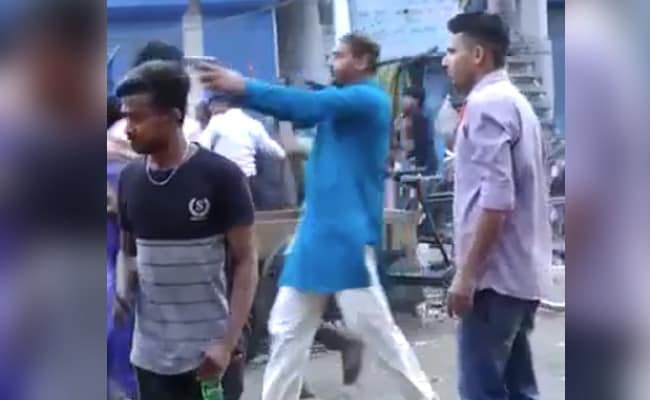 A 28-year-old man who opened fire during the violence in Delhi’s Jahangirpuri on Saturday has been arrested.

A video that the police said is circulating on social media shows a man in a blue kurta opening fire during the incident.

“The 28-year-old man in the blue kurta, Sonu alias Imam alias Yunus, whose video was being circulated on April 17 on social media for opening fire during the violence in the Jahangirpuri area, Delhi, on April 16, has been nabbed,” police said.

Earlier in the day, a team of police personnel had gone to Sonu’s house for search and examination.

“A video was being circulated on April 17 on social media showing a man (in blue kurta) opening fire during the violence in Jahangirpuri area on April 16. A police team had gone to his house in CD Park road in his search and for examination of his family members,” said Deputy Commissioner of Police (DCP) North-West, Usha Rangnani.

A total of 23 people have been arrested and two juveniles detained so far in connection with the incident in which nine people, including eight police personnel and a civilian, were injured.

Delhi Police Commissioner Rakesh Asthana, while addressing a press conference on Monday, assured that action will be taken against those found guilty irrespective of their class, creed, community and religion.

Two prime accused were sent to police custody till Wednesday by a Delhi Court today. Four other fresh accused of the incident were sent to judicial custody for 14 days.

A day earlier, during submission before the court, Delhi Police alleged that the main accused got to know about the ‘Shobha Yatra’ on April 15 and then they built up this “conspiracy.” Delhi Police also said, “We have to go through the CCTV footage, and identify others involved in this case.”