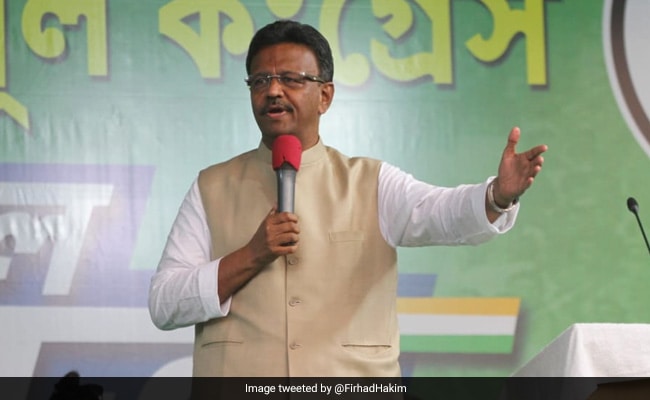 Kolkata Mayor Firhad Hakim on Thursday visited Bowbazar area where cracks appeared overnight in a number of houses when tunnelling was going on to extend the underground metro rail network. He blamed the agency executing the project for the problem which has led to evacuation of people from the damaged buildings.

Mr Hakim, also the urban development minister, claimed that the cracks on houses at Durga Pitury Lane were likely to have occurred owing to continuing soil settlement in the area triggered by an accident over two and half years ago during tunnelling work by the Kolkata Metro Railway Corporation (KMRC).

Stating that its priority is to prevent further cracks in buildings, the KMRC said that 87 people of 21 families from at least nine damaged houses at Durga Pituri Lane in the congested Bowbazar area have been shifted to nearby hotels.

A top KMRC official said that the situation occurred despite precautionary measures as the agency had faced a similar situation earlier.

“There is some irresponsibility on their (KMRC) part. During a meeting following the accident in 2019, the KMRC had said that it took the total engineering responsibility of that area,” the mayor told reporters during a visit to the spot.

A tunnel boring machine (TBM) had hit an aquifer on August 31, 2019, in Bowbazar area leading to severe ground subsidence and collapse of several buildings.

The KMRC, the executing agency for the East-West Metro project, has failed to take the responsibility, Mr Hakim claimed and added that it should have taken care of the buildings before cracks developed in them.

Tunnels of the long awaited corridor, which will connect Salt Lake Sector-V in the East and Howrah Maidan in the West, pass under Bowbazar. Most of the buildings in that area are over a century old.

The mayor said that the director general of the building department of the Kolkata Municipal Corporation (KMC) has been asked to assess how safe it would be to let the damaged buildings exist and a decision will be taken soon.

He said that the KMC and the KMRC will hold joint meetings to assess the fate of those buildings.

KMRC general manager, administration, A K Nandy said that engineers have been working in the metro tunnels passing below the affected area since Wednesday night and the reasons for the cracks can be ascertained only after their assessment.

Measures were taken by the KMRC to stop water seepage in the affected area.

Director (project) of the KMRC, N C Karmali, said that water seepage took place “despite taking all precautions when we were excavating by grouting below the TBM tunnel.” He said that the rainfall that occurred in the past few days might have contributed to the excess water content in the soil.

The incident occurred during ongoing work for joining the tunnels coming from the Sealdah side in the under-construction East-West corridor and the Esplanade side in the existing North-South corridor, Mr Karmali said.

In August 2019, several houses at Durga Pituri Lane and adjoining areas were damaged owing to land subsidence caused by the aquifer burst leading to evacuation of a number of people.

Tunnelling work for both up and down lines between Howrah and Sealdah was completed over two months ago, Mr Nandy said.

Out of that length, underground corridor constitutes 10.8 km between Howrah and Phoolbagan, with the tunnel passing below the Hooghly river, while the rest is elevated corridor, according to a KMRC official.