In South Delhi’s affluent Panchsheel Park area, a 73-year-old cancer survivor is on a mission. Every morning he sets out for this mission in a modified Van.

Known as ‘the Matkaman’, Alag Natrajan’s mission is to ensure clean, portable water for every person. Alag Natrajan, after staying for over 30 years in London returned to India a decade back, after living a luxurious life abroad, the disparity and suffering of the poor back home shook Mr. Natrajan’s conscience and he decided to act. He says he has enough for himself and now he has dedicated his life to service for those who need it the most.

“I have no requirement for money anymore, I have enough money to buy luxurious cars but what good is a car worth one crore when the speed limit is 50 km/h (kilometre per hour) What good is more money? I’ve chosen to help the needy because of conscience and we all have conscience, it’s not executed because of greed”, says Mr. Natrajan.

Alag Natrajan initially helped cremate the bodies of the poor and those who had nobody coming forward for the final rites. Later Mr. Natrajan modified two vans and started serving water and gradually expanded to serving food at least twice every week. But most important part of his work is service with dignity. 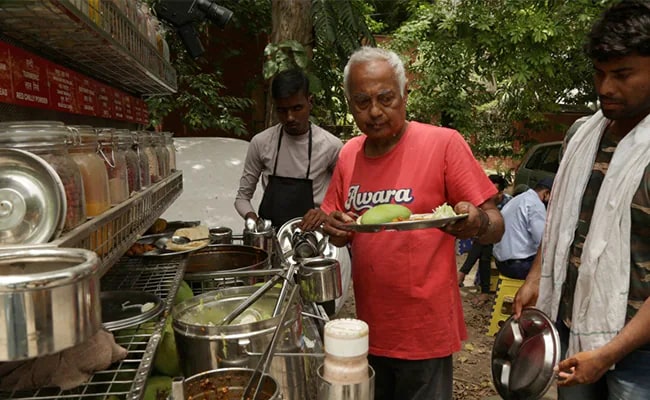 Man on the mission: This 73-year-old cancer survivor provides safe drinking water and food to people in need

“I roughly feed around 250 people, I know one thing and that is, whatever you do, do it well. The food I serve should have a standard, and hygiene is important. Food evolved for me, I didn’t start distributing food straight away. I started with cucumbers, then idlis and now it’s evolved into a proper meal.”

“These people are my guests, if I can’t serve them good food then why am I serving them? I serve them as I would serve my guests,” says Alag Natrajan.

The 73-year-old provides not just food to those who need it but brings foldable chairs so when people eat, they should eat without having to sit on the road.

While Alag Natrajan continues with the service, his wife quietly acts as a manager in the background. She says this work was his calling,

“Earlier we would live in a highline in London, go out, travel a lot, believe me, he had a Porsche earlier, now he has a 120 CC scooter. He wants to spend nothing on himself, his concept of spending money has changed. I’m very happy about it, it keeps him going. He does everything on his own, but there should be somebody tracking his work and finances so I manage that’, says Sita Natrajan.

While Alag Natrajan works every day to provide water to commuters across Delhi, his work becomes a lifesaver in the sweltering heat of Delhi. Thousands of people are dependent on the Matkas installed by Mr. Natrajan in different parts of Delhi. 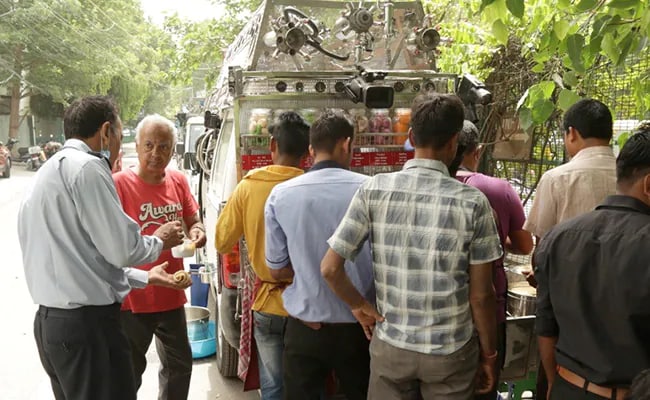 All the workers here, in this locality, know that there will be water at the stand of Matkaman. They say, ‘We don’t get water outside anywhere else.’

In case the water gets depleted There is a number given too. ‘Whenever we call the Matkaman comes and fills the Matkas again irrespective of the time of the day.’

“You can’t even buy water it’s costly, a person like me can’t afford to buy water, neither we can ask these Bungalow owners repeatedly for water,” says Ramesh, a security guard near Panchsheel Park.

For those who get food prepared by the Matkaman the experience is that of a 5-star hotel.

“Juice, fruits, Lassi, he provides a variety of food in lunch, he cleans the Matkas and doesn’t just do some kind of formality. Many times we think that we’ll go home and eat and stay hungry all day to save money, but many people are dependent on him for food, he gives respect to everyone and hygienic food,” says Dharamveer, an auto Rickshaw driver.

Rafial Islam, a garbage collector, adds, “Today he served rajma, aloo, mango, watermelon, kulche, salad it’s an experience like a 5-star hotel.” Mr. Islam, as he finishes the lunch beside the modified Van of the Matkaman, concludes, “Food, water, money for weddings or death, if anyone needs it, he helps in every way. During the lockdown, he helped with money, ration, warm clothes, and medicines to everyone who asked him for help. We feel extremely happy when we see him, have never seen anybody like him in Delhi all my life. He does everything himself and the respect he gives, we don’t even get respect like this at our homes.”