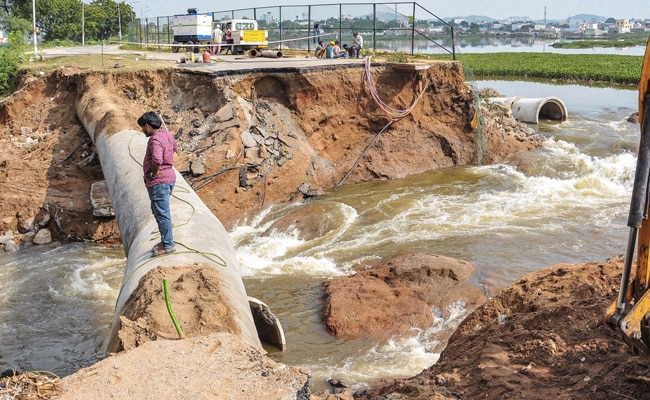 After two spells of massive downpour in Hyderabad last week that killed 70 in Telangana, breached at least three major lakes, causing heavy flooding and havoc in many parts of the city, the administration is now gearing up for more rain. The weather office has warned of heavy rain for the next three to days too.

While 33 people have died in the Greater Hyderabad Municipal Corporation (GHMC) area, 37 deaths have been reported in the adjoining areas.

Several parts on the Old City area continue to be flooded, with the police, the disaster response force, municipality and police stretched thin and working round the clock.

Six people, including of two children, died in the second spell of rain on Saturday evening. More bodies were recovered from the devastation caused by rain last Tuesday and Wednesday, including a body recovered from inside a car that got washed away.

“We have 18 boats in GHMC. Andhra Pradesh is sending us a few. Other agencies as well (are sending boats), so we will have up to 50,” he said, for rescuing those stranded. “There is no denying there are illegal encroachments. Lake beds have become colonies, storm water drains need modernisation, they are clogged. We want to find a permanent solution to these problems. Our immediate priority however is to save lives,” he said.

Last week, the Telangana capital witnessed one of the worst deluges for a single day in October in over a century early, with about 20 cm to 32 cm of rain being recorded in the city and its surrounding areas.

Exams to be held today by Osmania University for undergraduate and postgraduate courses have been postponed.

A cause of concern in terms of preparedness for more rain is that the Doppler radar at the weather station in Hyderabad, that predicts the quantum of rain with more accuracy locality-wise, is under repair, apparently due to voltage fluctuations, reportedly caused by bad weather.

At least 50 people died in the first spell of massive downpour last week, that continued for days. The assessed damage in the state is over Rs. 6,000 crore.

Visuals from Saturday night’s deluge showed vehicles being swept away as streets got submerged in water. On Sunday, people were seen on their rooftops after floodwater entered their homes.