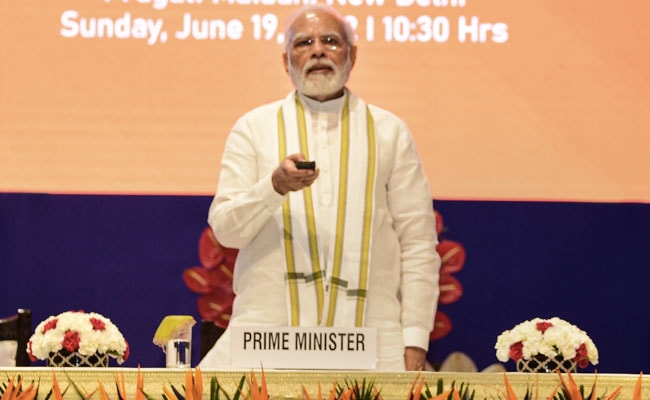 Prime Minister Narendra Modi today praised the speed with which the Pragati Maidan Integrated Transit Corridor in central Delhi was constructed despite facing hurdles, as he inaugurated the facility.

The transit corridor provides a clear access to Pragati Maidan where big trade fairs and events are usually held. The area near the Central Vista project and the Supreme Court sees one of the highest traffic in the national capital. The completed project is a 1.4-km six-lane tunnel under Pragati Maidan comprising five underpasses.

“It was not at all easy to complete the Integrated Transit Corridor in such a short time. This is one of the busiest roads in Delhi. Lakhs of vehicles run here every day. Seven railway lines are above the tunnel,” PM Modi said at the inauguration, news agency ANI reported.

“The project faced many hurdles. The Covid pandemic happened, brought with it many difficulties. And there is no dearth of people in our country who knock at judiciary’s door for everything, which brings up new problems in taking the country forward. This project, too, had to go through such difficulties,” PM Modi said.

“But,” the Prime Minister added, “This is new India. We have to find solutions to problems and take decisions and bring them to conclusion.”

#WATCH | This project had to undergo several obstacles including COVID…And then there’s no dearth of people in our country who knock on Judiciary’s door, disrupt the process of such projects but we made it through: PM Modi on launch of Pragati Maidan Integrated Transit Corridor pic.twitter.com/QeUNyTVKup

It will provide hassle-free access to the new exhibition and convention centre being developed at Pragati Maidan, where big events such as Delhi Book Fair, Defence Expo and India International Trade Fair used to be held before the new project started.

PM Modi cited a number of initiatives, including Eastern and Western Peripheral Expressways, doubling metro tracks in Delhi and National Capital Region, and the Delhi-Meerut highway, among others, as steps taken by his government to solve the region’s access and transport infrastructure problems.