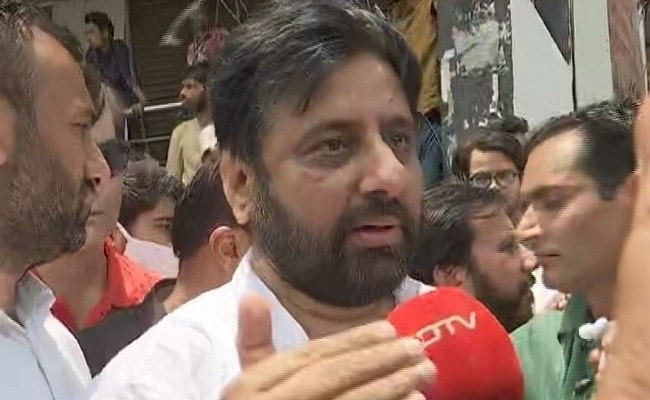 Amanatullah Khan alleged that the municipal body was carrying out the drive to “disturb the atmosphere”.

“The people of the area had already removed the encroachments at my request. There are no illegal structures here. They have brought the bulldozer and put it here to show that I am obstructing their work to remove encroachment,” Mr Khan told NDTV.

“Wazu Khana (washing area) and toilets outside a mosque here were removed in presence of police, earlier. When there are no encroachments, why have they come here? Just to do politics?” the AAP MLA said.

Mr Khan alleged that the municipal body was carrying out the drive to “disturb the atmosphere”.

“When I removed all the encroachments, then the MCD (Municipal Corporation of Delhi) has come to disturb the atmosphere. Why else have they come? If there is any encroachment in my constituency, tell me, I will remove it,” he said.

Protests erupted in Shaheen Bagh, the heart of the anti-citizenship law demonstrations that had riled the ruling BJP at the centre, ahead of the demolition drive on Monday as hundreds of people including women launched a sit-in as SDMC officials reached the spot with bulldozers to carry out the exercise.

Protesters raised slogans against SDMC as well as the central government and demanded they stop the action that mirrored a similar move in Jahangirpuri last month after communal clashes.

Shaheen Bagh that falls under the central zone of SDMC, was the centre of protests and sit-ins against Citizenship (Amendment) Act in December 2019 over fears that it would disenfranchise Muslims who could not furnish decades-old ancestry papers. The sit-in was called off in March 2020 because of the COVID-19 pandemic.

Monday’s demolition drive was stopped soon after it began after Amanatullah Khan’s intervention.