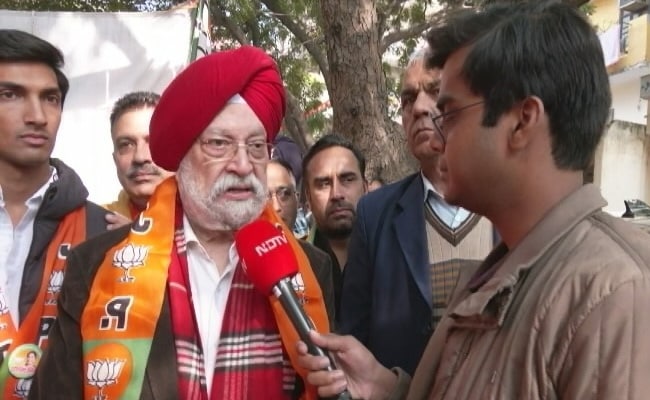 The MCD polls will be held on December 4.

Union Minister Hardeep Singh Puri, who hit the campaign trail in Delhi for the upcoming civic body polls, said his party takes elections seriously, not just because they have to win it, but wants to create a “a politically mature narrative”.

Speaking to NDTV, Mr Puri, who was leading the BJP’s ‘super Sunday’ campaigning, said elections provide the party with an opportunity to take their programs, and plan of action before the people.

Mr Puri took a swipe at the Aam Aadmi Party’s “freebies” strategy for polls, and said the more pressing issue is to “rebuild the city” as the national capital’s land area has remained the same while its population has increased manifold.

“The candidate here has said she will make it the most beautiful constituency,” he said while canvassing for the BJP’s candidate in Kalkaji area of south Delhi.

Hardeep Singh Puri, while pointing out that Arvind Kejriwal during the massive Anna Hazare-led anti-corruption movement had said he’ll never get into politics and remain a social activist group against corruption, said AAP has now become the “most corrupt party in the country”. He cited “what the party has done” in the two states it holds power in — Delhi and Punjab — as evidence of AAP’s apparent corruption.

“That political start-up was formed because the Congress government then was considered to be a record holder for all-time high corruption,” Mr Puri said on the emergence of AAP.

BJP chief JP Nadda also today went door to door in Delhi’s Wazirpur, seeking votes for his party’s candidates and handing out copies of the party’s ‘Sankalp Patra’ (manifesto). He was accompanied by BJP MP Harsh Vardhan and other party leaders.

The BJP plans to reach out to voters across the 250 Municipal Corporation of Delhi (MCD) wards. It has deployed around 100 of its big guns, including several Union ministers, chief ministers of party-ruled states and senior office-bearers, for the task.

The MCD polls will be held on December 4 and the counting of votes will take place on December 7.