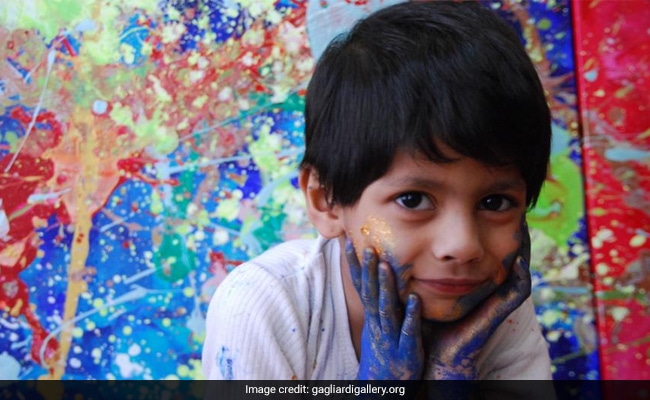 Advait Kolarkar’s paintings will be displayed at Gagliardi Gallery next month.

Advait Kolarkar, a seven-year-old child prodigy from Pune, is hard at work for the first solo exhibition in London of his vibrant paintings to be held at Gagliardi Gallery starting next month.

The schoolboy, who is currently in the process of completing his collection for the exhibition, started painting as he played with food colours at just eight months old.

His mother, Shruti, a visual designer herself, and software engineer father Amit spotted potential talent and handed him a canvas.

“The walls of our house bear Advait’s creative flair that comes out in promising shapes,” Shruti told PTI, as the family prepared for his London solo debut.

“He is very thrilled and can’t wait to be in London to present his artistry and meet new people. He is already dreaming and imagining how things will take place. He has created a wide range of paintings for the show and is in the process of creating some more,” said the proud mum.

According to her, Advait’s paintings incorporate stories born out of his vivid imagination. His canvas is covered with motifs such as oceans and dinosaurs, etched with a range of tools – from brushes, rollers, spatulas to fingers and hands – as he enjoys experimenting with a variety of materials.

“These artworks tell a story filled with intuition and raw power. We see a glimpse of his imagination – a beautiful world where colours lead to a path of discovery. The London exhibition will be a journey of intense creative moments and a magical, innocent world,” said Shruti.

Advait, who has exhibited his works in India and around the world in the US and Canada, is the 2020 winner of the Global Child Prodigy Award.

“I am delighted to host Advait Kolarkar’s first solo exhibition in London following the artist’s previous successes including the New York ArtExpo, London Art Biennale 2021 and shows around the world,” said Peter Gagliardi, curator at the gallery which will showcase Advait’s artwork starting May 12.

“When Kolarkar learnt to speak, colours dominated his vocabulary and at the age of two years old he could differentiate Naples Yellow from Cadmium Yellow and Burnt Sienna from Raw Sienna. Today, his work will be the focus of a solo exhibition of over 25 original artworks in the heart of Chelsea,” said Gagliardi.

After the London solo exhibition outing, Advait’s work is headed for showings at prestigious events in Las Vegas, New York and Italy over the course of this year. When not painting, the young artist enjoys reading and playing with his older sister Swara, whose creative pursuits are in the area of creating caricatures and comic strips and writing stories.

“Advait loves reading and learning about new things. He has already read all his school books, just like his other story books, even before the school started. School is fun for him,” shared his mother.

“Painting and learning new things are two of his favourite things. He goes quite easy on studies and does his schoolwork quickly, so he has more time to play. He has been managing quite well and coming up with flying colours,” she said.