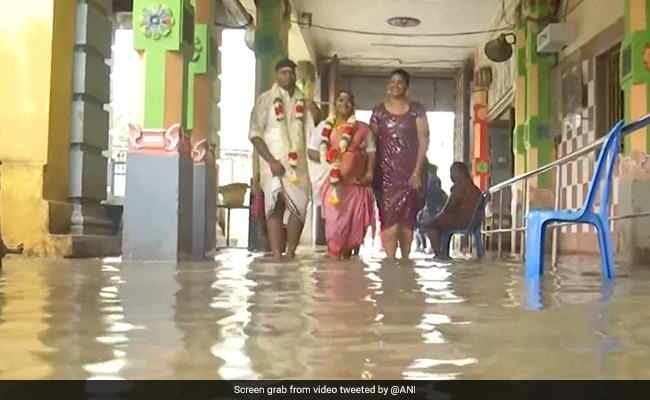 A video from outside the temple shows a couple walking on the waterlogged street.

Several weddings in Tamil Nadu’s Chennai were today delayed after the city was hit by heavy rainfall. Almost all parts of Chennai and some of its neighbouring districts received moderate to heavy rains today.

At the Anjineyar temple in Chennai’s Pulianthope area, five weddings were delayed today due to waterlogging inside the temple. Couples, who had scheduled their wedding months ago, lined up outside the temple braving the extreme weather conditions.

A video from outside the temple shows a couple holding umbrellas and walking on the waterlogged street before they enter the flooded temple premises.

#WATCH | Tamil Nadu: 5 weddings that were scheduled at Anjineyar temple in Pulianthope were delayed due to rainfall today. Couples lined up for wedding ceremonies were drenched as they walked through the water logged inside the temple. These weddings were scheduled months ago. pic.twitter.com/OA96wQEiz2

“The temple is waterlogged and we have been drenched. I appeal the government to take steps to at least clear the temple premises and other public areas,” one of the grooms told news agency ANI.

Intermittent showers began on Thursday night and intensified today in several regions of Tamil Nadu, leading to waterlogging and disruption in vehicular movement. Schools and colleges were closed in Chennai and 22 other districts.