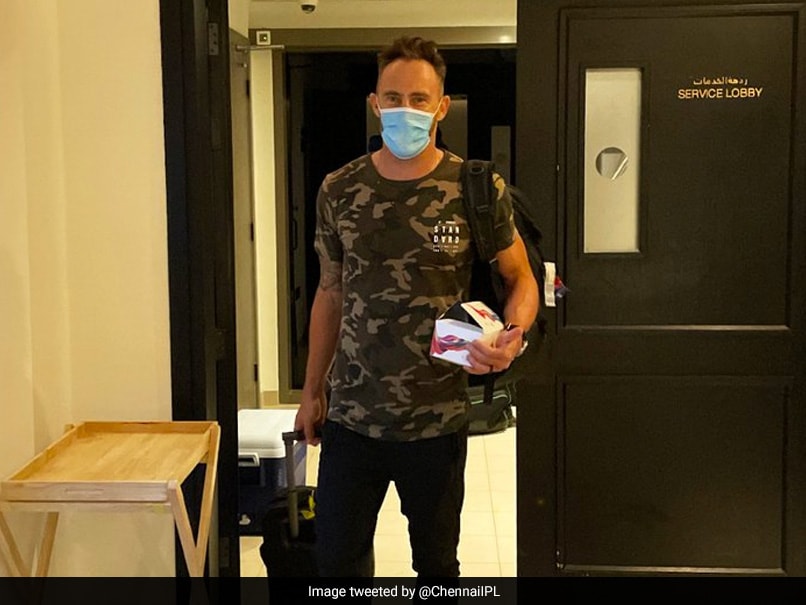 CSK shared a picture of Faf du Plessis at the team hotel.© CSK/Twitter

IPL 2021 resumes on September 19 with teams hard at work in the United Arab Emirates (UAE), gearing up for the tournament’s resumption. While the main core of pretty much all teams are already in the UAE, many international stars are still making their way. On Friday, Chennai Super Kings welcomed back three of their international big wigs in Faf du Plessis, Imran Tahir and Dwayne Bravo. The Chennai outfit took to Twitter to make the announcement, posting pictures of the three reaching the UAE. “3x the Excitement. Fafulous Champion Express,” CSK captioned the tweet.

CSK will once again have MS Dhoni at the helm of affairs and after a nightmare outing in IPL 2020, the team started the 2021 season well before a Covid disruption put a halt to the tournament in May this year.

Last year, CSK won just six of their 14 matches, finishing with a total of 12 points to occupy seventh place in the IPL points table. This was the first time in IPL’s history that CSK failed to qualify for the playoffs.

However, in IPL 2021, the Dhoni-led outfit made giant strides to once again be in the reckoning for a top four spot. When IPL was stopped in May, CSK were second in the IPL points table with five wins in seven games, trailing leaders Delhi Capitals by two points, having played a game less.

The three-time IPL champions resume their IPL 2021 campaign on September 19, a mouthwatering clash against defending champions Mumbai Indians at the Dubai International Stadium.