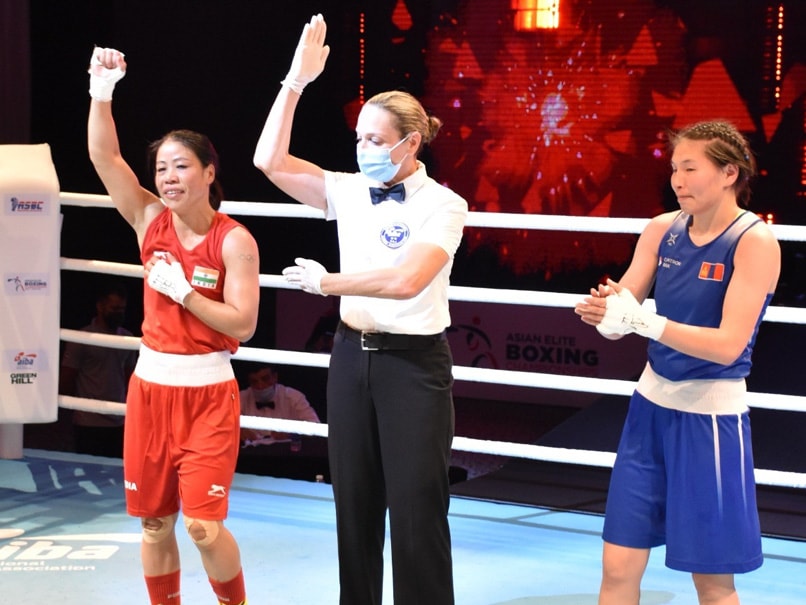 The veteran’s right hooks were particularly impressive in a compelling performance. She fought with a perilously low guard despite the aggressive intent shown by her rival and relied on her sharp reflexes to score on counter-attacks.

The 38-year-old will now be gunning for her sixth gold medal at the continental showpiece. She will be up against Kazakhstan’s Nazym Kyzaibay, a two-time world champion.

Sakshi also endured a tough one against Zholaman but came out trumps, riding on her grit.

Earlier, in an intense contest, Monika just could not keep pace with Balkibekova, who craftily dodged the Indian’s attacks and connected some eye-catching combination punches to dominate the proceedings.

On Wednesday night, the Olympic-bound Ashish Kumar (75kg) lost 2-3 to Asian Games silver-medallist Abilkhan Amankul of Kazakhstan in the quarterfinal.

Also going down in the quarters was Narender (+91kg). He lost 0-5 to Kazakhstan’s Kamshibek Kunkabayev.

Of these, Panghal and Krishan are bound for the Tokyo Olympics.

India have secured an unprecedented 15 medals in the tournament.

Diego Maradona’s Doctor, Six Others, To Be Questioned In His Death