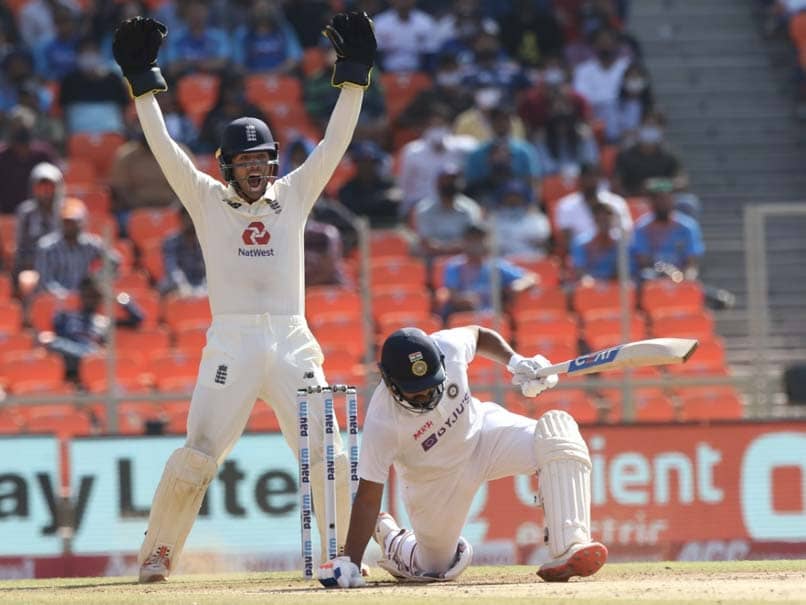 Ben Foakes impressed during England’s tour of India earlier in the year.© BCCI

England men’s cricket team coach Chris Silverwood on Wednesday called up Kent’s wicketkeeper-batsman Sam Billings and Nottinghamshire’s top-order batsman Haseeb Hameed for the upcoming Test series against New Zealand. The call-ups come as Surrey and England wicketkeeper Ben Foakes has been ruled out of the upcoming Test series against New Zealand after tearing his left hamstring. Foakes, who was selected in the England men’s squad earlier this month, was set to play his first Test in home conditions next month at Lord’s, but he sustained the injury on Sunday slipping in the dressing room after Surrey’s County Championship fixture against Middlesex at the Kia Oval.

“He will now be assessed and work closely on his rehabilitation with the Surrey medical team and is expected to be out of action for at least three months,” the England and Wales Cricket Board (ECB) said in an official statement.

Billings, an established member of England’s white-ball squads, is uncapped as a Test player.

On the other hand, Hameed, who has been in impressive form during the 2021 county season, has scored 474 runs at an average of 52.66. He last played Test cricket in November 2016. His three Test caps came against India during England’s winter tour of 2016.

Hameed will play for Nottinghamshire in this week’s County Championship match against Warwickshire at Edgbaston starting on Thursday. He will join up with the England team at their base in London on Sunday night.

England and New Zealand will be facing off in two Tests, beginning June 2 at Lord’s Cricket Ground.

The second Test between England and New Zealand at Edgbaston will be the first pilot event within the second phase of the government’s world-leading Events Research Programme and have crowds coming in for the June 10 to 14 encounter.

As per a report on edgbaston.com, the stadium will be able to accommodate around 18,000 spectators each day, 70 per cent of total stadium capacity. Each individual ticket holder must present a negative COVID-19 result from an NHS Rapid Lateral Flow Test, completed within 24 hours in advance of the day they are attending and give consent to take part in the programme.