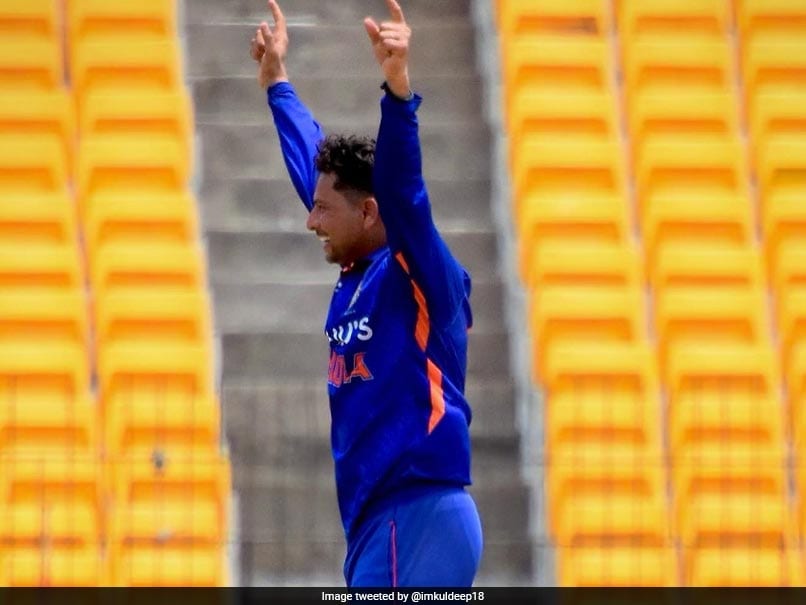 Left-arm spinner Kuldeep Yadav’s sensational hat-trick and Prithvi Shaw’s quick-fire half century (77) set up a four-wicket win for India ‘A’ against New Zealand ‘A’ in the second unofficial ODI to clinch the three-match series on Sunday. Electing to bat, New Zealand ‘A’ were all out for 219 in 47 overs as Kuldeep picked up the last four wickets, including the hat-trick. From 210 for 6, the visiting team collapsed to 219 all out as Kuldeep ran riot. After dismissing Sean Solia for his first scalp of the match, Yadav picked up the wickets of Logan Van Beek, Joe Walker and Jacob Duffy to complete a memorable hat-trick.

India ‘A’ chased down the target with 16 overs to spare to notch-up a series-clinching win, reaching 222 for 6 in 34 overs.

The home side won by seven wickets in the first match on Thursday. The third and last match will be played on Tuesday.

“A hat-trick at any level is special. This is a very special one,” Kuldeep told reporters later. Rachin Ravindra (61 off 65 balls) and Joe Carter (72 off 80 balls) set the platform for the Kiwis before Kuldeep got into the act.

The openers — Chad Bowes (15) and Ravindra — set the ball rolling, putting on 32 runs. Ravindra was the dominant partner in a 31-run stand with No.3 Dane Cleaver (6).

Ravindra played some pleasing shots and looked set for a big score before he fell to a catch by Ruturaj Gaikwad in the point region off Rishi Dhawan’s bowling after the score had crossed the 100-mark.

NZ ‘A’ captain Robert O’Donnell fell for a duck to Dhawan, dragging a delivery on to his stumps while attempting a pull.

Indian under-19 World Cup winning player and medium-pacer Raj Angad Bawa then sent back Tom Bruce (10) to leave the Kiwis at 133 for 5.

Carter, who was the top-scorer with an enterprising 72, hit the first six for the visitors and continued to push the score along. A miscued slog off leg-spinner Rahul Chahar (2 for 50) led to his dismissal.

Solia became Kuldeep’s first victim after a watchful 28 off 49 balls.

In his final over, Kuldeep got van Beek (4), whose attempted reverse sweep took an edge and flew to Shaw in the point region. Next ball, he had Walker (0) caught behind by Samson with a superb delivery and finished things off by trapping Duffy (0) LBW.

Chasing a modest 220 to win and seal the series, Shaw got off to a flier and smashed the ball around as the Indian score reached 50 in the seventh over.

There was no stopping the diminutive Shaw as he reached 50 from 26 balls with a sweep shot. He hit 11 fours and 3 sixes in his superlative 48-ball knock.

Gaikwad, who was sedate in comparison, fell for 30 off 34 balls.

The in-form Rajat Patidar then fell for 20 at team score of 131 for 2 while Shaw fell to Walker two runs later.

Skipper Samson went after the bowling and hit 37 off 35 balls, studded with four boundaries and two sixes before a superb diving catch by Chad Bowes cut short his stay.

Tilak Varma and Bawa fell for ducks and India ‘A’ appeared to be in some trouble but Rishi Dhawan (22 not out off 43 balls) and Shardul Thakur (25 not out off 24 balls) saw the team home.