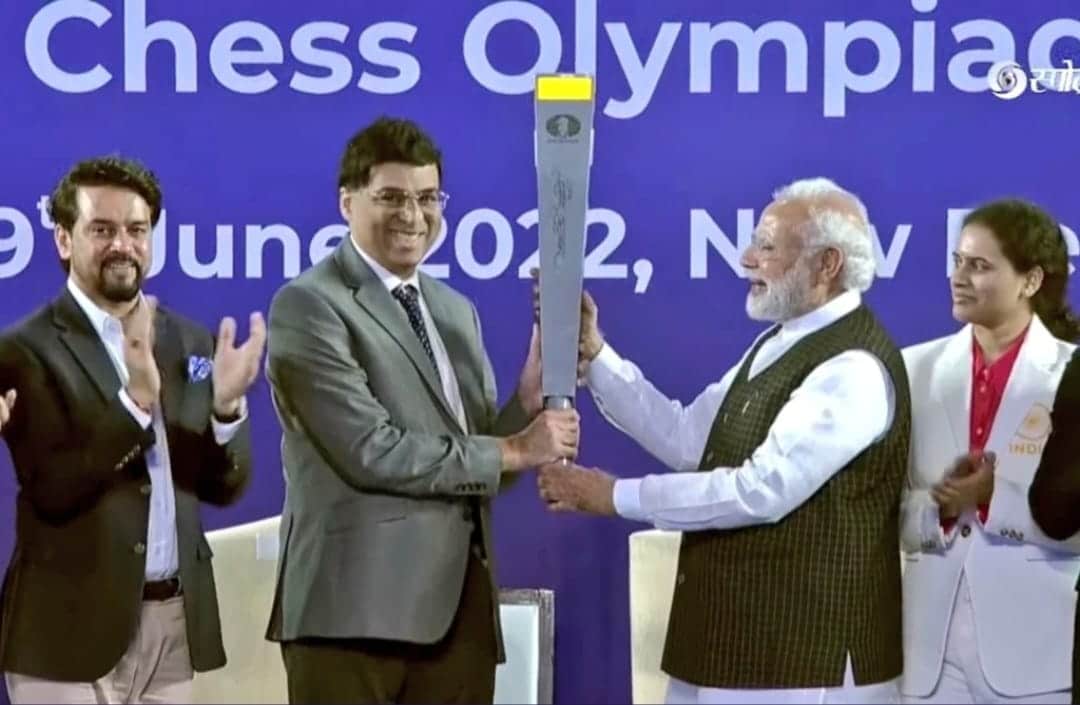 Prime Minister Narendra Modi on Sunday flagged off the first-ever torch relay for the Chess Olympiad ahead of the 44th edition of the event, which is to be held in Mahabalipuram from July 28 to August 10. The international chess body, FIDE, for the very first time has instituted the torch relay, which is part of the Olympic tradition, but was never done in the Chess Olympiad. FIDE President Arkady Dvorkovich handed over the torch to the prime minister who gave it to the legendary Viswanathan Anand.

The torch will be taken to 75 cities in a span of 40 days before arriving in Mahabalipuram near Chennai. At every location, chess grandmasters of the state will receive the torch.

In nearly 100 years of the history of the Chess Olympiad, it’s the first time that India will be hosting the prestigious event. With 188 countries registered for the upcoming Olympiad, the country is set to witness a huge congregation of nations for a sporting event for the first time on Indian soil.

Speaking on the occasion, PM Modi, who made a ceremonial move on the chess board against woman Grandmaster Kneru Humpy, said: “The first-ever torch relay of the Chess Olympiad is starting from India, it is also the first time India is hosting the big event.

“FIDE has decided that the torch relay will start from India. It is not just India’s honour but honour for chess.” Modi said chess is not just a game but has now become an educational tool.

Modi said yoga and meditation are vital to success in chess.

“It is a big opportunity for India that the land where chess originated, it will be hosted in this country. I thank the PM for his endeavour and support.” “Whenever torch relay happens it will start from India. In 1956, India participated for first time in Chess Olympiad and then took years to win a medal, but after that, never looked back,” he said.

“Today there is immense awareness about sports in the country, thanks to our PM. He is not just a sports enthusiast, sports lover, he is an avid sports fan too who cares about our sportspersons.” World chess body president Dvorkovich said he is grateful to the Indian government for hosting the prestigious event.

“I am delighted to start the new tradition torch relay in India. Olympic flame is a symbol of Olympic movement and friendship, same will be the torch relay. In future we plan to expand the torch relay to the entire world but it will always start from India.

“FIDE is grateful to Government of India for taking this initiative which will make this game popular. Hope chess can become a part of educational programme in all schools across India and the world,” he said.

“India, today, is the fastest growing chess country in the world. It’s a dream to host the Olympiad in India.” The ceremony started with the traditional dances of India depicting the 64 squares.

The programme also showcased the history of the ancient game, its origin and evolution.