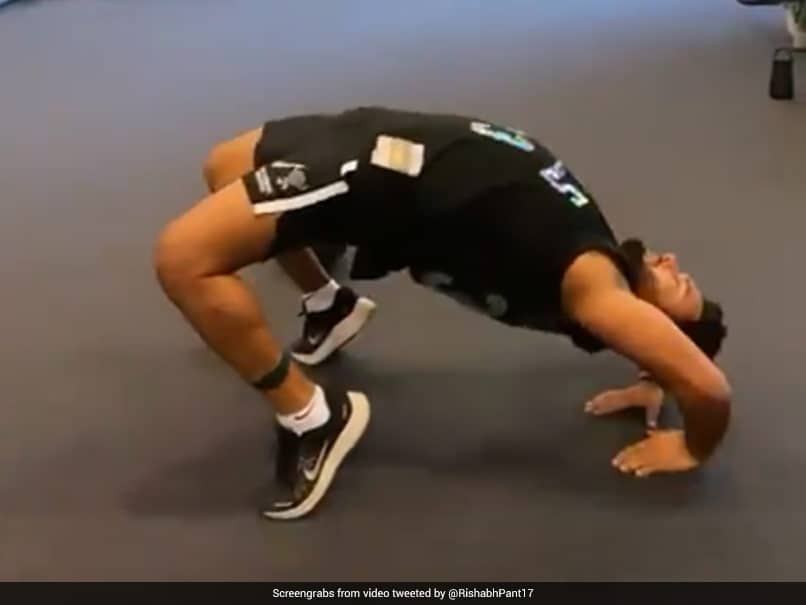 Rishabh Pant posted a video of himself performing a back bend stretch.© Twitter

Rishabh Pant took to Twitter to share a video of himself in which the India wicketkeeper-batsman was seen working out on Wednesday. In the 15-second video Pant can be seen showcasing his flexibility by performing back bend stretch and he finishes it up with a kip-up. “The world may seem upside down at times, but the goals are always in sight,” Pant captioned the video. Impressed by Pant, who led the Delhi franchise in regular skipper Shreyas Iyer‘s absence, Delhi Capitals re-tweeted the video and wrote “Mr. Pantastic. really elastic.”

The world may seem upside down at times, but the goals are always in sight #RP17 pic.twitter.com/81wwGI1rOG

Rishabh Pant and other members of the Indian Test squad are currently quarantining in Mumbai ahead of their tour to the UK.

India are set to play six Test matches in England, including the World Test Championship final against New Zealand that starts on June 18.

The 23-year-old wicketkeeper-batsman has been in fine form with the bat and behind the stumps. Pant, who didn’t play the first Test during India’s last tour to Australia, played a pivotal role in the remaining games as the visitors won the four-match series 2-1.

In the fourth and final Test in Brisbane, Pant played an unbeaten match-winning knock of 89 to guide India to a historic win.

In the home series against England, Pant continued his form and scored 270 runs in six innings. He slammed a century and a couple of half-centuries against an attack comprising of James Anderson and Jofra Archer.

In the last couple of years, the left-handed batsman has become an integral part of the Indian team and Virat Kohli and co. will be hoping that Pant delivers once again when Team India travel to the UK.