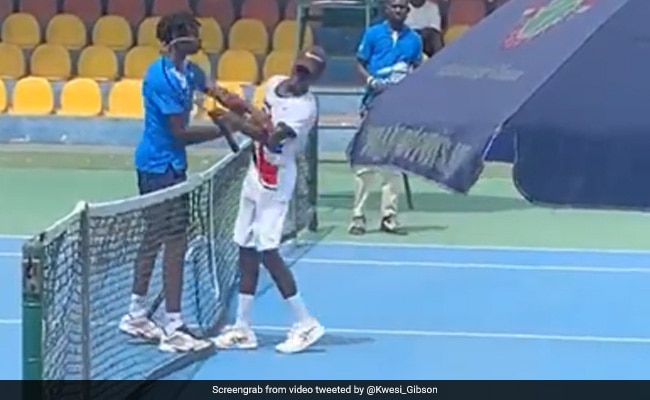 A controversy broke out during a tennis tournament in Ghana when one player slapped his opponent after a match. The incident happened during the ITF Juniors tournament on Monday, and the players involved are Michael Kouame and Raphael Nii Ankrah.

Kouame, 15, met Ghana’s slapped Ankrah at the centre court after losing the match. He appeared to reach for a handshake but slapped Ankrah in the face instead. The incident was captured by the viewers present there, and its video soon went viral.

The footage was initially shared by the Functional Tennis podcast, which said in an Instagram post on Tuesday that the video will be removed. But, a tennis coach obtained the video and posted it on Twitter after which it went viral, according to New York Post. It has been viewed more than 7.38 lakh times on Twitter.

Kouame, a tennis player from France, was the top seen in the competition but lost the opening set to his opponent. He won the second set, which sent the match to a tie-break.

The tie-break too was tightly contested but Ankrah finally emerged victorious. The final score was 6-2, 6-7, 7-6.

The Ghanaian was stunned by Kouame’s slap and during the brawl, argued with the French player. It’s unclear what caused Kouame to lash out at Ankrah.

Ankrah has now advanced to the second round where he will face Ishmael Nii Nortey Dowuona, also from Ghana.

He also appeared in a doubles match against Italy’s Davide Brunetti and France’s Michael Kaouk.