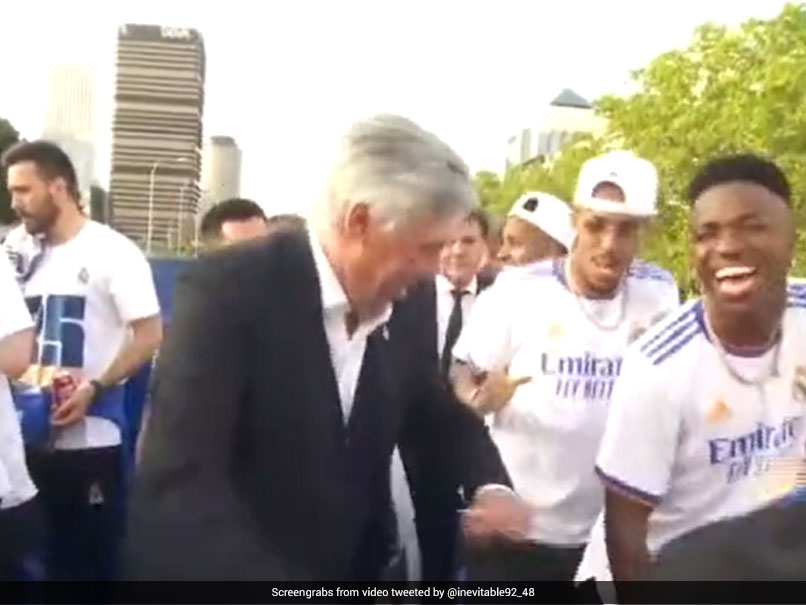 Celebrating Real Madrid’s 2021-22 La Liga title, Carlo Ancelotti won fans over with an epic dance with Vinicius Jr and Gabriel Militao. The Real Madrid head coach was recorded showing off some groovy moves with his two Brazilian players on the bus, which was on its way to Cibeles and it didn’t go unnoticed. The Los Blancos won the title after sealing a 4-0 win vs Espanyol on Saturday at the Santiago Bernabeu.

Here is the video of Ancelotti dancing with VInicious and Militao:

During the 4-0 win, Rodrygo opened the scoring with a goal in the 33rd-minute. He completed his brace with another in the 43rd-minute.

Real Madrid entered half-time with a 2-0 lead and increased it in the 55th-minute with Marco Asensio finding the back of the net. Meanwhile, talismanic striker Karim Benzema made it 4-0 in the 81st-minute.

The Spanish side also won the league with four games to spare and have registered 81 points from 34 matches until now, including 25 wins, six draws and three defeats. They have also scored 73 goals in the LaLiga this season and conceded 29.

After the title win, Ancelotti told Mobistar Plus, “It’s the first time I’ve won a title at the Bernabeu, the atmosphere is really something special”.

“If I was crying (at the final whistle), it’s because I’m happy.”

While speaking to Real Madrid TV, he said, “Winning La Liga is special”.

“We played a great match, the atmosphere was incredible and we hope to repeat that Wednesday.”

Since 1989-90, this is the first time Madrid have won the title with four games to spare.

“It’s the first time we’ve won it with as many games to go, that means a lot. We’ve had an incredible season and now we want to celebrate that a bit,” said Modric.