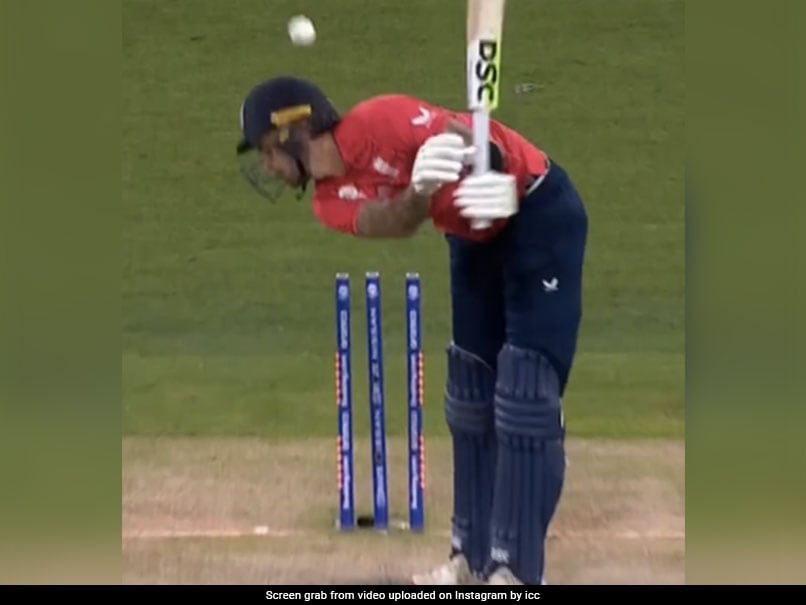 Defending a total of 137, Shaheen Afridi gave Pakistan a dream start against England in the ongoing T20 World Cup final at the Melbourne Cricket Ground. In the first over of England’s chase, Afridi cleaned up Alex Hales with a sharp in-swinger. Hales failed to make room for himself as the delivery nipped back in sharply, rattling the stumps after deflecting off the pads. The video was shared by ICC on its official Instagram handle.

With the ball, Sam Curran bagged three wickets for just 12 runs as England held Pakistan to 137/8.

With the rain staying away, England produced disciplined and economical bowling to restrict the 2009 champions who never really got going, with Shan Masood’s 38 being the top score.

Adil Rashid’s leg-spin also proved crucial, removing the dangerous Mohammad Haris with his opening ball and then getting the crucial wicket of Babar Azam to end with 2-22.

Jos Buttler’s England, who reached the final with a thumping 10-wicket win over India, are aiming to become the sport’s first-ever dual white-ball champions after winning the 50-over World Cup in 2019.

Both teams are looking for a second T20 title after Pakistan’s success in 2009 and England’s a year later.

England, who were again without injured batsman Dawid Malan and pace bowler Mark Wood, won the toss and sent Pakistan into bat.

Ben Stokes was given the new ball and Pakistan were lucky to survive the over intact, with a nervy Mohammad Rizwan almost run out going for a risky single.

If Chris Jordan’s throw had been a direct hit he would have been gone.

Rizwan and Azam shared a century partnership in the semi-final against New Zealand and soon settled, with Rizwan clearing the ropes off Chris Woakes for the first six of the night in the fourth over.

But another big stand wasn’t to be, with Rizwan dragging a delivery from Curran onto his stumps on 15.

Pakistan, who powered past New Zealand by seven wickets to make the final, managed just 39-1 off the six-over powerplay, where only two fielders are allowed outside the 30-yard circle.

The introduction of Rashid soon after reaped an immediate reward with Haris (8) attacking him on his first ball only to sky a simple catch to Stokes.

Azam led Pakistan to 68-2 at the halfway point of the innings and then Masood began swinging the bat, hitting a four and six off Liam Livingstone.

But once again Rashid got the breakthrough, pulling off a diving catch from his own bowling to claim the vital wicket of Azam, whose 32 came off 28 balls.

Iftikhar Ahmed only lasted six balls before Masood and Shadab Khan (20) fell in the space of two runs as Curran and Chris Jordan kept the lid on any hope Pakistan had of a late flurry.