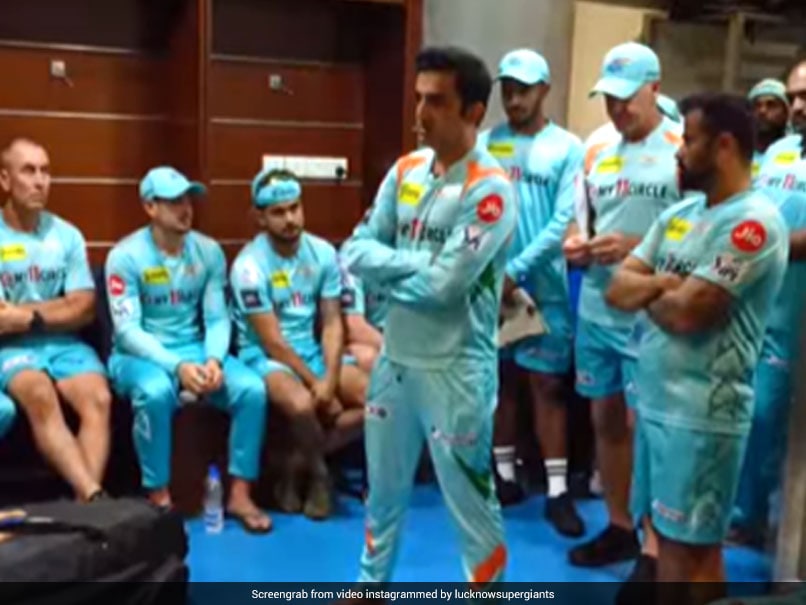 LSG mentor Gautam Gambhir came down hard on the players in the dressing room.© Instagram

Lucknow Super Giants registered their lowest score of the season as they were skittled out for a total of 82 against Gujarat Titans at the MCA Stadium in Pune. The KL Rahul-led side eventually lost the match by 62 runs. Following the defeat to table-toppers GT, LSG mentor Gautam Gambhir came down hard on the players in the dressing room, saying that that while losing is okay, giving up is unacceptable. Stating that LSG lacked the game sense, the two-time IPL-winning captain said there is no place for being weak in a competition like the IPL.

“There is nothing wrong in losing. It is absolutely fine. One team has to win one team has to lose. But there is a lot wrong in giving up. Today I thought that we gave up and were weak,” Gambhir said in a video uploaded by LSG on their official Instagram handle.

“And honestly, there is no place for being weak in a tournament like the IPL or in sport. That is where the problem is. We have beaten sides in this competition but I felt today we lacked the game sense, which was more important,” he said.

With the win, GT became the first team to qualify for the playoffs.

After opting the bat, GT posted a total of 144 for four, following Shubman Gill‘s knock of 63 off just 49 deliveries.

For LSG, Avesh Khan took two for 26 while Mohsin Khan and Jason Holder got one each.

In reply, LSG were bowled out for a paltry sum of 82 as Rashid Khan bagged a four-wicket haul.

Despite the defeat, LSG remain second on the IPL 2022 points table with eight wins from 12 outings.

They will now take on Rajasthan Royals in their next match on Sunday, May 15.