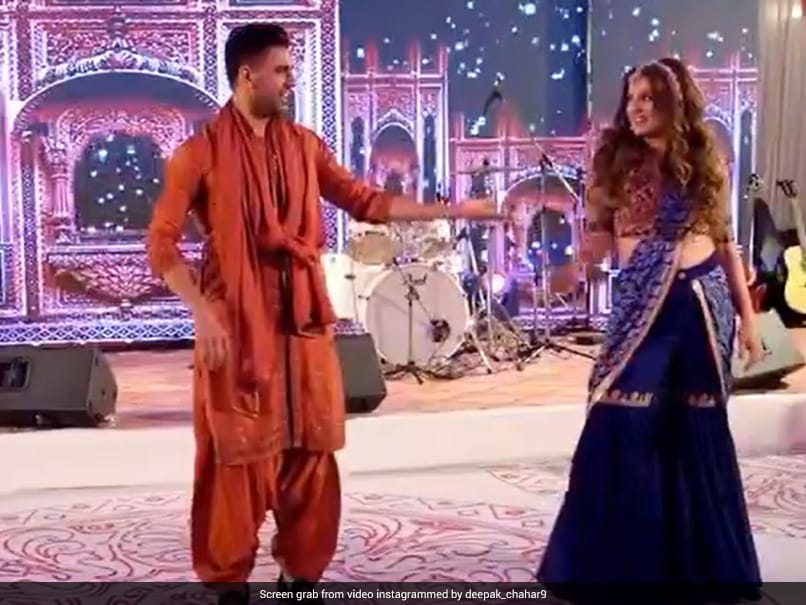 India pacer Deepak Chahar on Sunday shared an adorable video on social media in which he can be seen dancing with his wife Jaya Bhardwaj. The video posted by the player on Instagram is presumably from the sangeet ceremony of his marriage. Notably, Chahar had tied knot with Jaya on June 1 in a private ceremony in Agra. While the wedding was attended by his relatives and close friends, his teammates from Chennai Super Kings and Indian cricket team made it to his reception.

While sharing the dance video from his marriage, Chahar said that he felt more pressure than a cricket match.

Earlier, sharing the picture of his wedding, Chahar had written on social media: “When I met you the first time, I felt that you are the one, and I was right. We have enjoyed every moment of our life together and I promise you to keep you always happy like this. One of the best moments of my life. Everyone, pls give your blessings to us.”

On the work front, the right-arm swing bowler is currently recovering from a back injury. He is reportedly set to remain on the sidelines for another three to four months which might see him miss the T20 World Cup in Australia, starting October 16.

Chahar was picked by Chennai Super Kings for a whopping sum of INR 14 crore at the IPL 2022 auctions. Back then, the pacer was recovering from a quadriceps injury he had suffered during the T20I series against West Indies in February, but a fresh back injury ruled him out of entire IPL 2022 before the mega event kicked off.