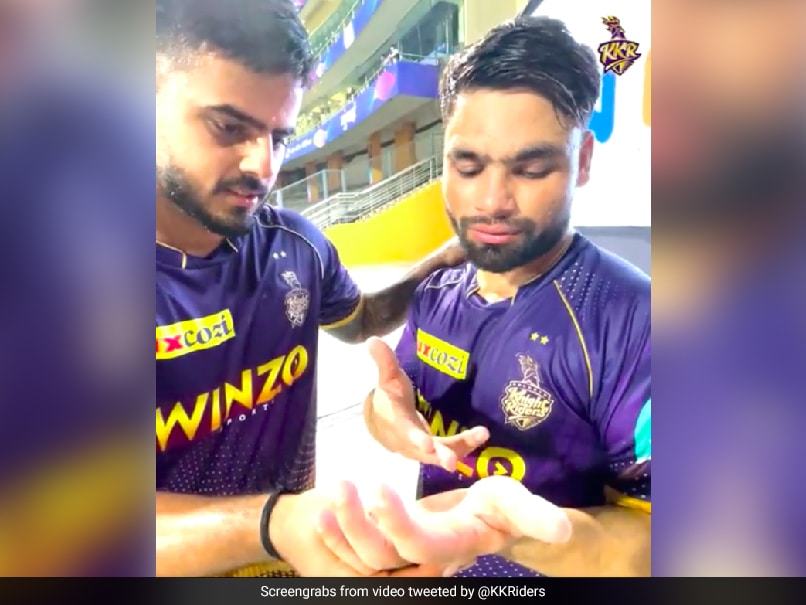 Kolkata Knight Riders (KKR) batter Rinku Singh starred in the chase against Rajasthan Royals in an IPL 2022 clash on Monday, his unbeaten knock helping his team emerge victorious. But more sensational than the knock itself was the prediction he made for himself. Rinku Singh had also written something on his palm which he later revealed to teammate Nitish Rana. Speaking to Rana after their seven-wicket win, Rinku told the left-hander that he had written he was going to score a fifty and predicted that he would bag the player of the match award. Although, the victory was achieved before either of Rana or Rinku could get to their fifties, but both remained unbeaten and amazingly Rinku also received the player of the match.

In KKR’s video, Nitish Rana asked Rinku “What have you written on your hands?” to which Rinku replied, “I was getting a feeling that I will score runs and get Player of the Match today. And I wrote 50 runs on my hand and drew a heart.”

Rinku also revealed that he had made the prediction before the match and had a feeling that he was going to do well vs RR.

“There was a feeling from the inside. I was waiting for a long time to get a Player of the Match… It came after 5 years but it came at last.”

Rinku remained unbeaten on 42 off 23 balls while Nitish scored 48 runs 0ff 37 deliveries to guide KKR to a crucial win with five balls to spare.

This was KKR’s fourth win in 10 games. They are currently placed seventh in the IPL Points table.