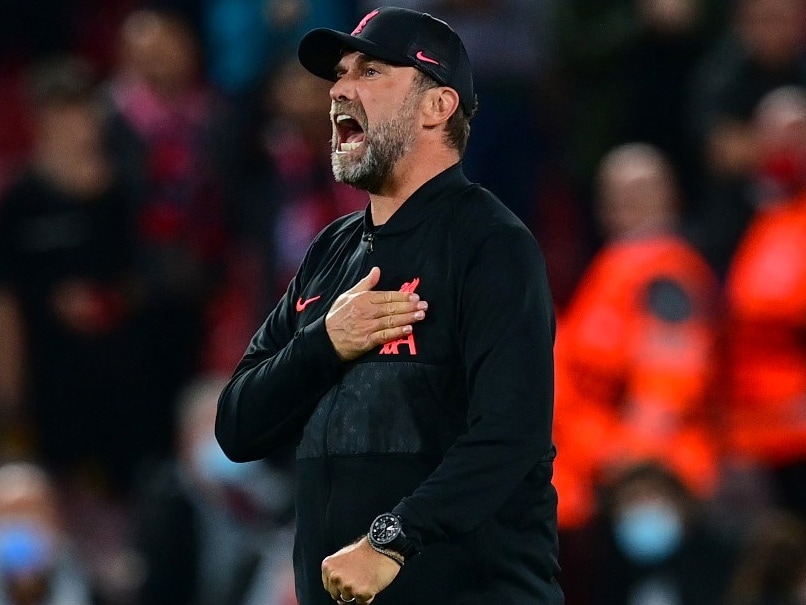 Liverpool captain Jordan Henderson slammed home a stunning late winning goal at Anfield against AC Milan in their Champions League group stage encounter on Wednesday. As Milan failed to clear the ball from a corner, Henderson sweetly struck a half-volley from just outside the area that rocketed into the bottom left corner of the net in the 69th minute to help Liverpool seal a come-from-behind 3-2 win against the Rossoneri on their return to Champions League football. Henderson himself wheeled away in celebration after the goal, but it was manager Jurgen Klopp who had the most priceless reaction to the English midfielder’s winner.

Getting off his seat on the Liverpool bench, Klopp walked up to Spanish midfielder Thiago, who was celebrating with his arms up in the air on the sideline. The German manager grabbed Thiago and lifted him up in the air in joy, his trademark grin firmly in place.

Henderson’s goal in itself was a great one and drew comparisons to Liverpool legend Steven Gerrard.

Henderson with those Gerrard vibes pic.twitter.com/yMAt2FZLla

In the match, Liverpool took an early lead through Milan defender Fikoyo Tomori, who turned in a cross from Trent Alexander-Arnold into his own net.

The Merseyside team had the chance to double their advantage soon after, but Mohamed Salah’s powerful penalty was saved by Milan goalkeeper Mike Maignan.

Even as Liverpool continued to dominate proceedings, Milan scored twice in quick succession just before half-time to go ahead in the match. Ante Rebic scored the equaliser for Milan, while Brahim Diaz scored Milan’s second.

But their advantage was short-lived as Salah eventually found the back of the net soon after the restart.

With the clock ticking, Henderson found the winner with just 20 minutes to go to take Liverpool to the top of Group B, after Atletico Madrid and FC Porto played out a goalless draw.