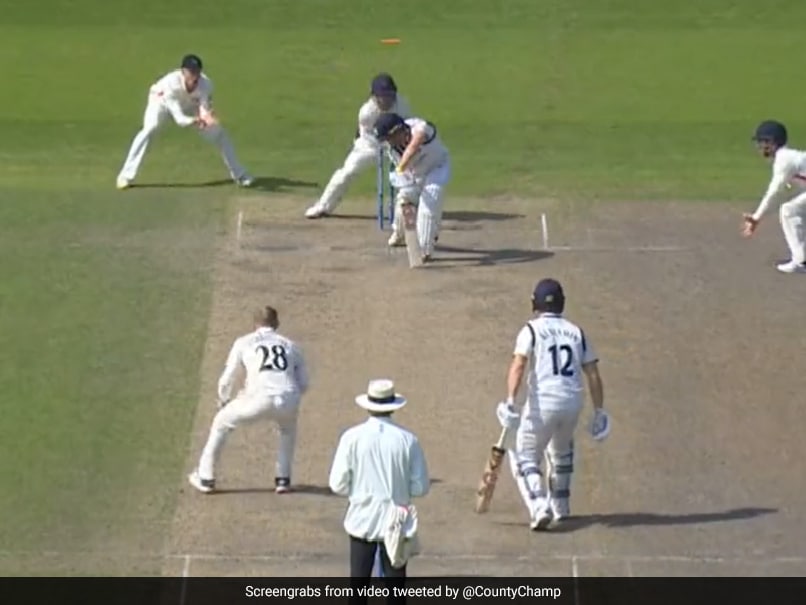 Lancashire leg-spinner Matt Parkinson bamboozled Warwickshire wicketkeeper-batter Michael Burgess with an absolute ripper in their County Championship Division 1 match that ended on Sunday. In Warwickshire’s second innings with the bat, Parkinson got the ball to drift and land outside the right-hander’s leg-stump. As the batter came forward to defend, the ball spun back in sharply to go past the willow and hit the top of off-stump. It was a leg-spinner’s dream delivery and sent Burgess packing for a four-ball duck.

How good is this delivery from @mattyparky96?

This is not the first time that Parkinson has bowled a magic ball in the County Championship.

In 2021, he castled Northampshire captain Adam Rossington with a delivery that was a contender to rival Shane Warne’s “Ball Of The Century”.

The legendary Shane Warne, who died in March due to a suspected heart attack in Thailand, was left impressed at the time by Parkinson’s jaffa.

“Wow ! Was that his first ball of the summer too ? Hahahaha. Love it, congrats mate and well bowled. Spin to win,” he had tweeted about the delivery.

Parkinson finished the match against Warwickshire with figures of 3/60 from 21 overs in the first innings and 3/64 from 34 overs in the second.

The match ended in a draw.

While Parkinson has played five ODIs and four T20 Internationals (T20Is), the leg-spinner is yet to make his Test debut for England.