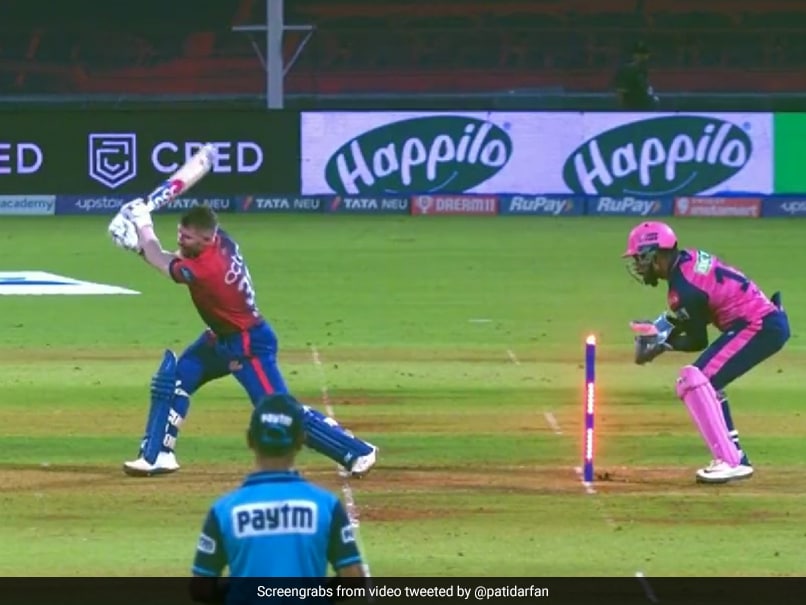 David Warner and Mitchell Marsh were in great form during Delhi Capitals’ eight-wicket win over Rajasthan Royals in an Indian Premier League (IPL) 2022 match on Wednesday. However, Warner rode his luck to stay unbeaten on 52 off 41 deliveries. Out of the few lucky escapes that he got, one was particularly bizarre. In the ninth over of DC’s chase of 161, Warner was bowled by Yuzvendra Chahal. However, the bails did not fall off and Warner was declared not out.

The incident left everyone stunned. To make matters worse, Warner was let off twice in the same over – once by Devdutt Padikkal and once by Jos Buttler. Ultimately, Warner stayed not out to take DC to their sixth win of the season.

“No (I have never got such a luck escape). I don’t know what is it with the stumps. It’s so hard. I thinks those grooves (the part where the bails are placed) are quite deep so…Look it was great for me but I was saying to Yuzi there that ‘Sometimes, you can play me with no spin, sometimes you can play me with wrist spin’ so await that turn,” Warner said after the game to Graeme Swann.

Watch: David Warner’s gets bowled but is not out

“Should we wait for the bails to be dislodged or should the batter be out if the the ball hits the stumps irrespective of whether the bails fall or not?” he wrote on social media.

Should we wait for the bails to be dislodged or should the batter be out if the the ball hits the stumps irrespective of whether the bails fall or not?

Option A. Bails need to be dislodged
Option B. Ball hits the stump means its out pic.twitter.com/mVBU7k0XzS

In the match, Mitchell Marsh scored 89 off 62 balls as Delhi Capitals defeated Rajasthan Royals by eight wickets to keep their IPL play-off hopes alive. Marsh roared back to form with seven sixes and five fours after picking up two wickets as DC restricted RR to 160 for six.

The Australian all-rounder shared a match-winning 143-run stand with compatriot David Warner, who scored an unbeaten 52 off 41, as Delhi won with 11 balls to spare.

Earlier, Ravichandran Ashwin scored 50 off 38 balls, his first half-century in T20 cricket, while Devdutt Padikkal hit 48 after being invited to bat. Marsh (2/25), Anrich Nortje (2/39) and Chetan Sakariya (2/23) were the wicket-takers for the Capitals.