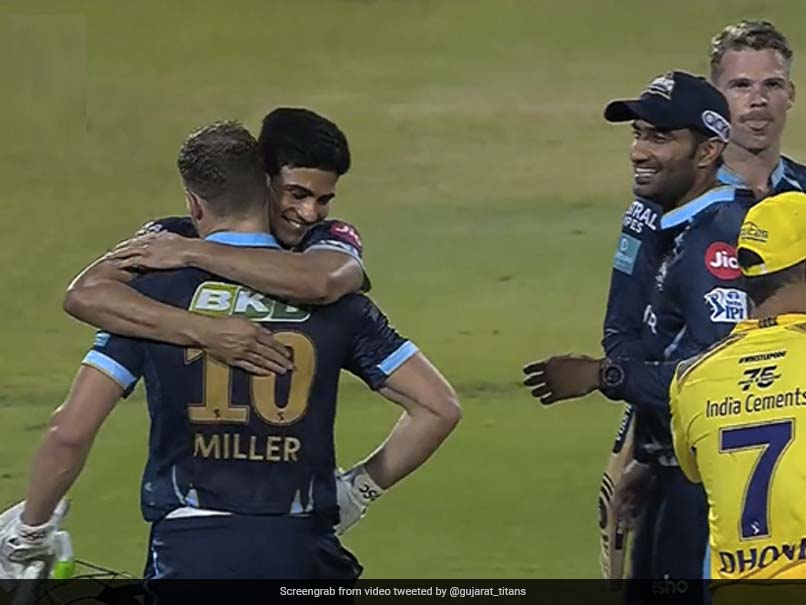 Gujarat Titans pulled off a heist on Sunday as they defeated Chennai Super Kings by three wickets to register their fifth win of the ongoing Indian Premier League (IPL) 2022 season. Chasing 170, Gujarat Titans were staring down the barrel at 87/5 in the 13th over but David Miller scored 94 runs off 51 balls to take his side over the line in the final over. After the win, Miller received a bear hug from opening batter Shubman Gill and Hardik Pandya could not also hold his laughter as Gujarat Titans pulled off a great escape.

That feeling. THAT FEELING! pic.twitter.com/eWwKlb4xLU

In the match against CSK, stand-in skipper Rashid Khan was also at his best as he played a quickfire 40-run cameo of just 21 balls and he took Chris Jordon to the cleaners in the 18th over of the innings.

With three overs to spare, CSK were the frontrunners to win the contest, but Rashid stepped up to the occasion and his onslaught was enough to change the tide of the game in the favour of Gujarat Titans.

In the final over, Miller managed to take Gujarat Titans over the line and now the franchise are at the top of the points table with ten points from six games.

Batting first, CSK had posted 169/5 in 20 overs owing to 73-run knock from Ruturaj Gaikwad. Ambati Rayudu also chipped in with an innings of 46 runs from 31 balls.

CSK are at the ninth spot in the points table with just two points and they will next square off against Mumbai Indians on Thursday.