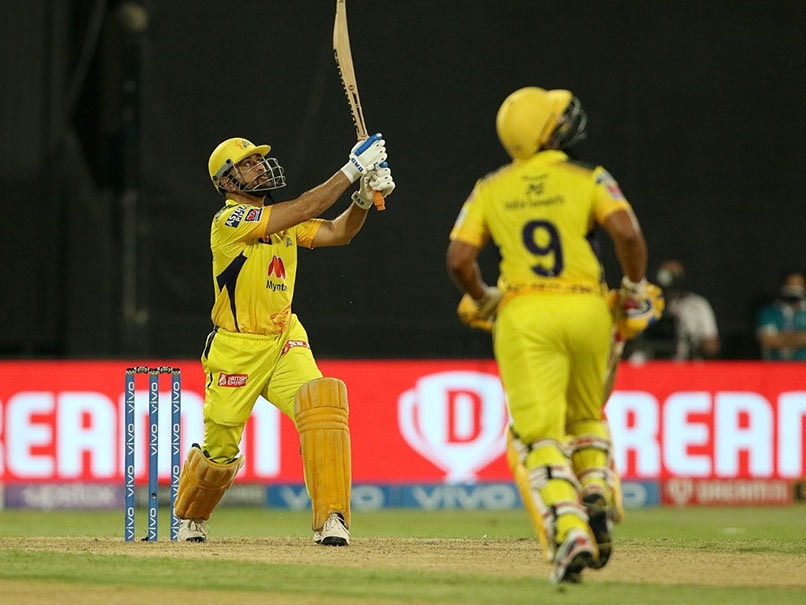 Chennai Super Kings captain MS Dhoni smashed a six in the final over off Siddarth Kaul to send his side into the play-offs of the ongoing Indian Premier League (IPL) 2021 on Thursday. Chasing 135 for the win, CSK needed three runs in the final over and Ambati Rayudu gave the strike to his skipper. Dhoni mistimed a pull shot but sent the fourth delivery over the boundary ropes for a maximum to finish off the match in style. With that six off Kaul, Dhoni not only secured the win for CSK but also assured the Chennai-based franchise a place in the play-offs.

Watch the six that sent CSK into the play-offs:

Finally got to see a six from MS Dhoni. #CSKvsSRH pic.twitter.com/S8T2zPJycO

Earlier, Dhoni had won the toss and invited SunRisers Hyderabad (SRH) to bat at the Sharjah Cricket Ground.

SRH got off to a poor start as they lost Jason Roy, who scored a half-century in the previous fixture, for just two.

Captain Kane Williamson too failed with the bat as he missed a full delivery by Dwayne Bravo. The West Indies all-rounder struck again to send back Priyam Garg.

Wriddhiman Saha (44) and late cameos from Abhishek Sharma and Abdul Samad helped SRH to post 134/7 in their allotted 20 overs.

Faf du Plessis and Ruturaj Gaikwad provided the perfect platform for CSK to chase down the small target.

The duo put on 75 runs for the opening wicket. Gaikad perished for 45 while Du Plessis (41) too missed his half-century.

In the end, CSK got over the line with two balls to spare.