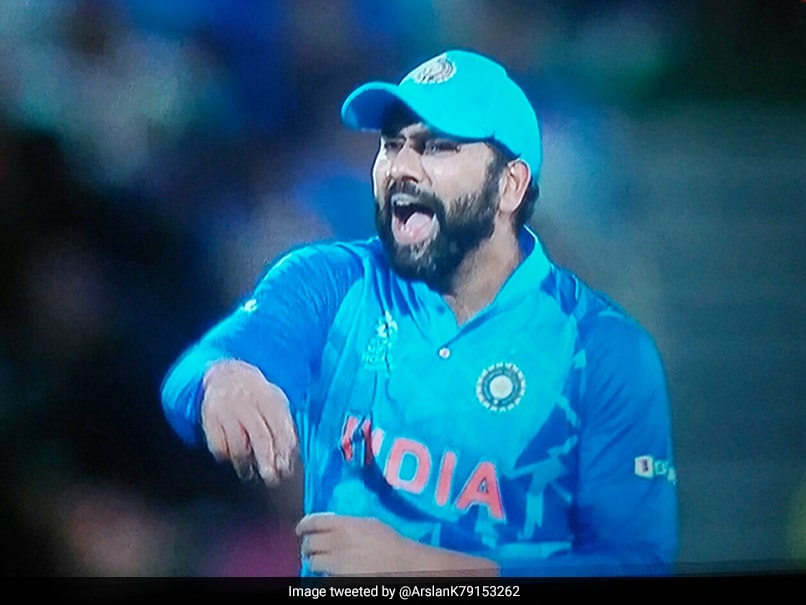 Rohit Sharma wasn’t happy with Shami’s fielding as he made some animated gestures.© Twitter

Hardik Pandya hit 63 off 33 balls to power India to a competitive 168/6 against England in the second semi-final of the T20 World Cup in Adelaide. In reply, openers Jos Buttler and Alex Hales stayed unbeaten on 80 and 86 respectively to take England past the target in just 16 overs. India thus were knocked out of the tournament with a 10-wicket loss. There were a couple of poor fielding effort by Team India during England’s chase. During the ninth over of England’s innings, Hales and Buttler ran four runs as Mohammed Shami made a mess of things. Shami, who was deployed at fine-leg, tried to pass the ball to Bhuvneshwar Kumar, who came racing in from third man.

Earlier, Hardik and Virat Kohli had taken India to a competitive total.

The pair added 61 runs for the fourth wicket before Kohli was dismissed on 50 by Chris Jordan, who was the top-performing England bowler with three wickets to his name.

Kohli, who had scored three half-centuries in the tournament prior to the semi-final, also became the first batter to score 4,000 or more T20I runs during his knock at the Adelaide Oval.

The winner of the match will meet Pakistan, who beat New Zealand in the first semi-final, at the Melbourne Cricket Ground in Sunday’s final.

India, who topped Group 2 with four wins in five matches, are searching for their first global title since the 2013 Champion Trophy triumph. They won the inaugural T20 World Cup in 2007.