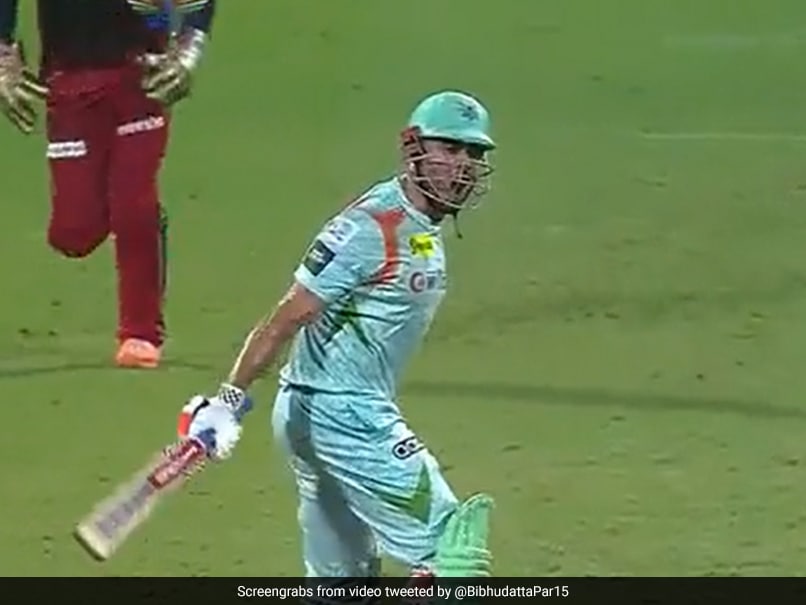 Lucknow Super Giants all-rounder Marcus Stoinis was livid after being dismissed by Josh Hazlewood in the closing stages of their failed chase against Royal Challengers Bangalore in the Indian Premier League (IPL) on Tuesday. With LSG needing 34 more to win, Stoinis moved across the stumps for the first delivery of the 19th over, but Hazlewood followed him and bowled it well wide. Stoinis left it alone but the umpire ruled it as a fair delivery, causing the Australian to gesticulate in frustration. Stoinis moved across the stumps again for the next delivery, expecting the pacer to go wide again, but this time Hazlewood bowled it into him and he only managed to get an inside edge onto the stumps, all but sealing the win for RCB.

Stoinis screamed out a profanity before swinging the bat at the ground, walking away in anger.

Watch: Marcus Stoinis’ reaction after getting out to Josh Hazlewood

Stoinis made 24 off 15 deliveries and was looking in good touch, even though the asking rate was up to 17 in the final two overs.

Stoinis was later given a reprimand for breaching the IPL Code of Conduct, although it wasn’t specified what for. LSG captain KL Rahul was also fined 20 per cent of his match fees for a breach of conduct.

Hazlewood himself agreed that the first delivery should have been given a wide.

“I tried to turn around and get back to my mark as quick as I could. I got pretty lucky on that one so I might have to get him a beer after that,” Hazlewood said at the post-match presentation ceremony.

Earlier, Faf du Plessis fell short of a maiden IPL century, scoring 96 off 64 deliveries, as RCB posted 181/6 after being put in to bat.

Then, Josh Hazlewood got two early wickets to put LSG under pressure and despite a 28-ball 42 from Krunal Pandya, they failed to chase down the target, finishing at 163/8.

Hazlewood was the star with the ball, picking four wickets and giving away just 25 runs.