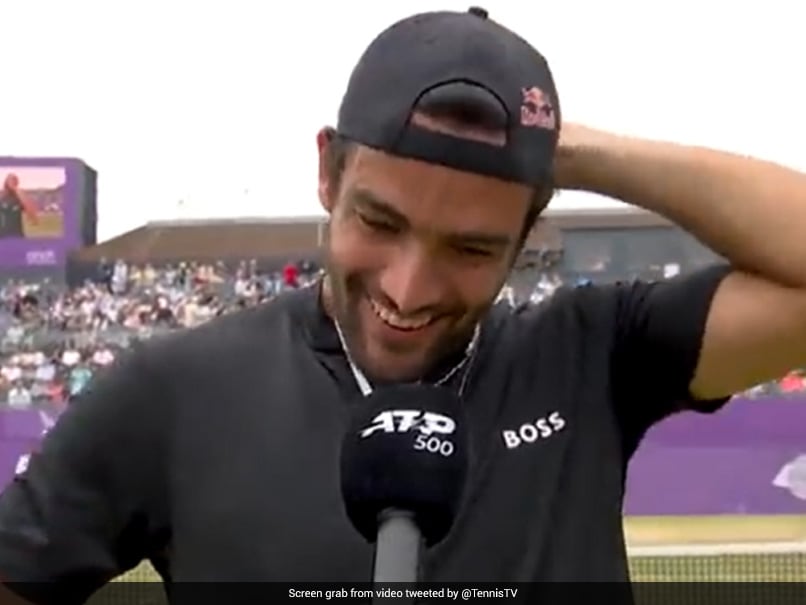 Defending champion Matteo Berrettini advanced to the final of Queen’s Club ATP grass-court tournament on Saturday. The 26-year-old Italian registered a 6-4, 6-3 win over Van de Zandschulp in the semi-finals of the tournament. The match was also affected by rain but that did not stop a determined Berrettini from marching into the title clash. After the match, the Italian had another reason to smile about. While speaking to the broadcasters following his win, a fan from the crowd proposed to Berrettini and his reply left everyone in splits.

As soon as the fan shouted from the crowd “Matteo, will you Marry me?”, the tennis player took a moment to smile before replying: “Let me think about it.”

“It was a really tough match. We stopped for the rain. I had a lot of chances. It was windy again and really tough to play but I definitely think it was the best match of the week, so I am really happy and looking forward to the final,” said the Italian player after the match.

Berrettini has won 19 of his last 20 grass-court matches. He will be playing his fourth successive grass-court final on Sunday, a feat that has been achieved only by Novak Djokovic, Roger Federer and Andy Murray among active players.

Berrettini will battle it out against Filip Krajinovic of Serbia in the summit clash of Queen’s Club 2022 tournament. Krajinovic advanced to the final by beating two-time champion Marin Cilic 6-3, 6-3.

Berrettini and Krajinovic have met twice before with the Italian winning both on clay including the final in Budapest two years ago.

The 26-year-old has returned strong following three months out, and is targeting his seventh tour-level crown and fourth on grass.