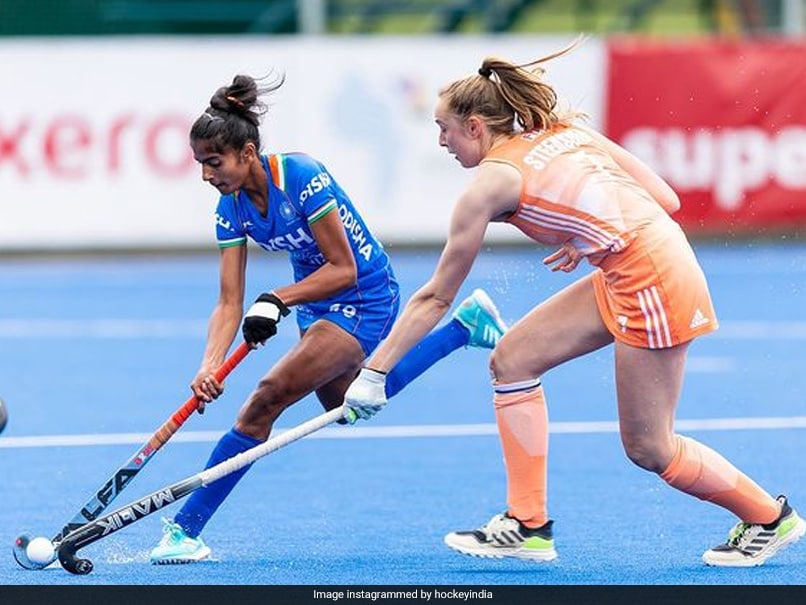 A fighting Indian Junior Women’s hockey team went down to the Netherlands who established supremacy with a 3-0 win in the Semi-final of the FIH Hockey Women’s Junior World Cup on Sunday. It was goals by Tessa Beetsma (12′), Luna Fokke (53′) and Jip Dicke (54′) that ensured the Netherlands booked their final berth. For India, Mumtaz Khan’s early shot on goal gave a positive start to their semi-final campaign. The forward has been quite impressive in the tournament so far, however, she could not find the right deflection as her shot hit the crossbar, denying India an early 1-0 lead.

Meanwhile, the Dutch came up with the brilliant 18-pass goal that was patiently executed, beating the Indian defense to the goal. It was the Player of the Match Tessa Beetsma who opened the scoreboard for the Dutch with that fine goal in the 12th minute.

A few minutes later, the Dutch took another brilliant shot on goal but the goal was disallowed by the umpire as the shot had come off the attacker’s back stick.

Though India showed their abilities with the attack, creating eight circle penetrations at halftime, with five shots on goal which included a couple of PCs, they were unable to find success.

With the match being evenly played by both teams, the Dutch returned after the half-time with an improvised attack that proved tough to beat for India. While they pushed for goals in the first few minutes of the third quarter, India lived up to the challenge with goalie Bichu Devi coming up with some fine saves.

The Indian team Captain Salima who tried to dominate the midfield in India’s attack was outnumbered by the Dutch defenders, and they denied India every opportunity to take successful shots on goal.

With the match going into the deciding quarter, India still had their hopes of making it 1-1. But the Dutch went on top gear to finish the match with two more goals in their kitty. Luna Fokke and Jip Dicke scored back-to-back goals in the 53rd and 54th minute which ensured they snatched the match from India and march into the Final.

India will play in the Bronze Medal match on 12th April 2022.