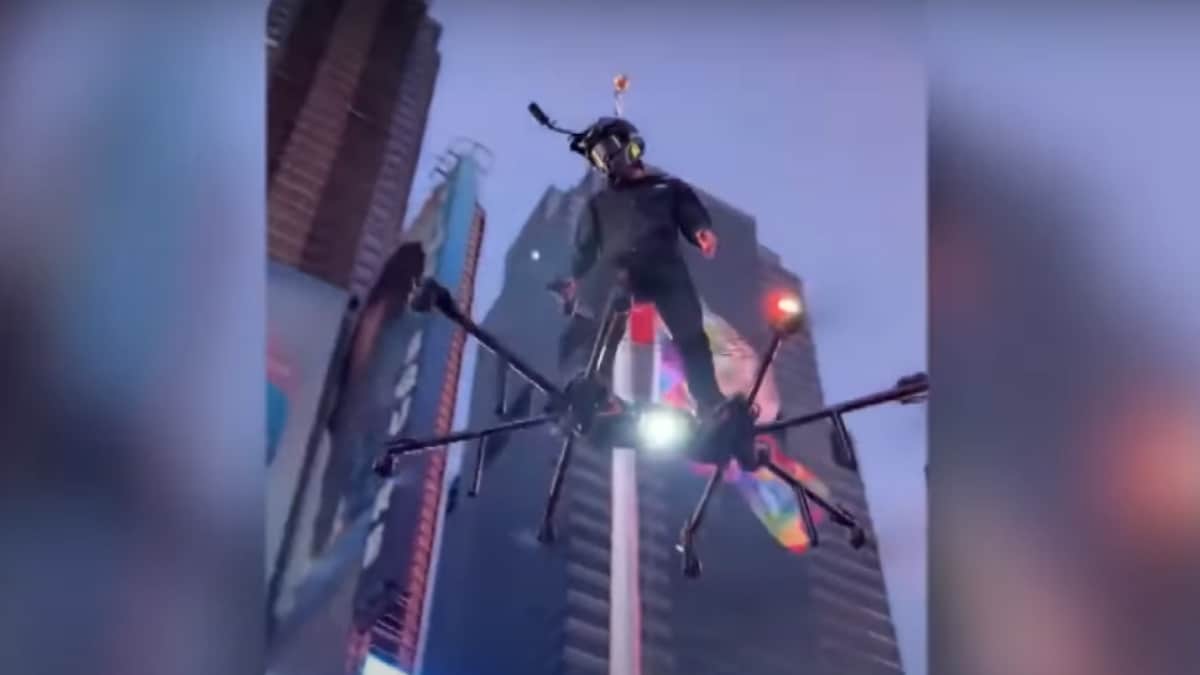 New Yorkers were pleasantly surprised when they spotted a man flying though the air on a hoverboard through Times Square on June 21. While a flying man may still not be the most usual sight, such hoverboards are fast becoming popular, especially among the younger generation. Remember French Franky Zapata, who, in 2019, flew over the English Channel on the flyboard? The 35km journey took him just 22 minutes after he touched speeds of up to 177kmph. No, it’s not Zapata at Times Square this time, but the man pulling off a flight on the hoverboard reminded us of the French inventor.

A video showed the man in full protective gear, standing atop the hoverboard, steady and cool as he zips through a crowded Times Square. Few passers-by, though a little surprised, quickly pulled out their mobile phones to record the man. There’s no denying that the 10-second video shared on Twitter had us thinking if it was a scene from a superhero film.

Oh nothing – just a dude flying around NYC… pic.twitter.com/qJp2mKgV8R

Many were reminded of Green Goblin, who first appeared as the antagonist in 2002’s Spider-Man. One of the users, @blurayangel, re-shared the video in the replies and wrote: “Green Goblin???”

Another user, @BlockbusterPlus, shared an image from the 2002 film.

And here’s another user, @Steven_C5, who warns: “We know how this turns out before.”

We’ve seen how this turns out before pic.twitter.com/X4yJ413weD

It’s all fun and games until you see him looking in your 2nd story bedroom window in the middle of the night.

Here are some more reactions:

That sound you hear is the sound of all of Twitter rushing to make the same Norman/Harry Osborn joke. And I’m not above joining the fray. pic.twitter.com/rU5TADw6mS

Green goblin when he finds out someone took his job pic.twitter.com/UKiOAV5VyA

He should add blades and orange hand grenades because you never know when you’ll run into a bug problem pic.twitter.com/0dAu882x7B

Here’s the rest of the video. pic.twitter.com/7EBKKCbY7l

While users wondered who the man was, the Inside Edition magazine tracked him down. The man flying like Green Goblin is Hunter Kowald, who said he had permission from the authorities to fly at Times Square.

“I spent years on this thing to make this happen, at least to do it safely and properly,” he said, adding it’s a highly engineered device. “There’s a lot of safety built into that device, so essentially, I could have two motors fail and still land safely,” Kowald said.

He further added that the stunt was legal. “We had permission and asked for it in advance, and everybody was around us to make sure we did it properly,” said Kowald.