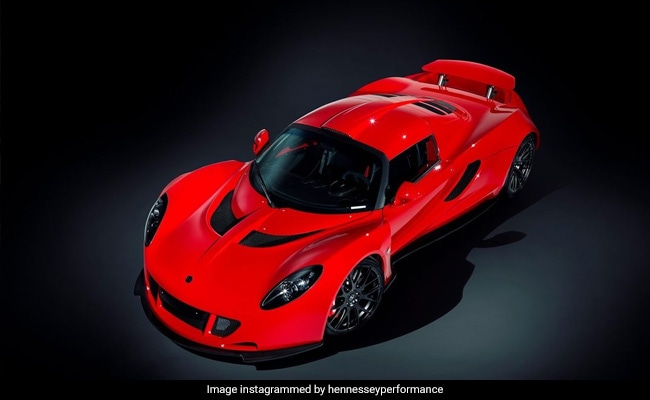 The Venom F5 has front fenders arched in a wolf snarl and a rear roofline ribbed like the back of some ancient reptile. The sides of its body are chiseled back to skeletal proportions; the quad cluster of rear tailpipes looks as if it might as well spew fire. It comes with a 6.6-liter twin-turbo 1,817-horsepower V8 engine and a featherlight weight of 2,998 pounds.

The $2.1 million coupe is considerably faster than the Hennessey Venom GT that set a 270.49 mph world record in 2014 and faster still than the Bugatti Chiron prototype, the current record holder at 304.77 mph; the fastest production car right now is the Koenigsegg Agera RS at 277.87 mph).

But the top speed is a byproduct of engineering, not the goal, says builder John Hennessey. He even tends to downplay the speed-record angle; only a third of his customers buy the handmade car for that title, he says. The others want it for other reasons-like, say, on joy rides down regular highways and spirited driving on local tracks. Or, presumably, to keep safely tucked away as an investment piece.

“We are really just trying to build a great car,” says Hennessey, who has made high-performance cars, SUVs, and work trucks for nearly 30 years in Sealy, Texas. “We compile the speed data to know what changes to make to make our car safe and reliable and fun and exciting to drive-if along the way, we are able to break a record then yeah, of course we want to be able to prove it, but we just kind of bake that into our process.”

Unlike some hypercars, which with their tin-body feel and lack of creature comforts can be uncomfortably stiff, hot, and loud, the Hennessey car is designed for all types of driving, not just high speeds. It’s a decathlete, he says, not just a sprinter.

“Straight-line performance and all that absolute speed might be its strongest strengths, but we intend for you to be able to jump in the F5 and get on a British B road and drive through the country and have an enjoyable time and not be spinning the tires at 100 miles an hour,” he says. Conveniences such as the interior leather sourced from one of Europe’s oldest tanneries-Muirhead Tannery in Glasgow, Scotland-plus Apple CarPlay and Android Auto, a nine-inch touchscreen, and satellite navigation in the Venom F5 amend that proposition, though anyone expecting to get their back massaged or to chill their Champagne bottle in the back should look to something rather more plush.

Hennessey’s carbon-fiber hypercar will have to best the SSC Tuatara first. Sort of. On Oct. 19, Washington-based SSC reported that its Tuatara hypercar had hit 316.11 mph on a lonely highway in Nevada, only to have subsequent video footage of the run undermine the claim’s accuracy. In an extensive YouTube video, eagle-eyed supercar fan Tim Burton aka Shmee highlighted inconsistencies with the distance, speeds, and times of the run in multiple videos recorded from inside the car’s cockpit.

SSC founder Jerrod Shelby (no relation to car builder Carroll Shelby) has said he will re-attempt the run but did not respond to requests to confirm when, where, and with which driver he would do it. SSC stands to lose millions of dollars if the 316 mph time is not replicated; for the particular type of buyer who can afford a multimillion plaything, those bragging rights mean everything.

In the meantime, Hennessey is busy building the Venom F5, with eight slated for deliveries in 2021 and a total of 24 to be made. More than half have been sold.

He will start high-speed time trials in February at the NASA Kennedy Space Center Shuttle Landing Facility. The eventual plan, Hennessey says, is to invite Burton, along with select reporters and officials from Guinness World Records and NASA, to witness a record-breaking event on a long Texas highway later in 2021. (At roughly two miles long, and with more than a mile of road required just to slow down any speeding hypercar, the NASA runway is not long enough for the Venom F5 to reach its uppermost speeds.)  Craig Breedlove, the professional driver and five-time world land speed record holder who was the first person in history to reach 500 mph and 600 mph, is expected be on hand, as is Walter Cunningham, the champion fighter pilot and last remaining astronaut from the Apollo 7 mission.

“I can’t talk to the other guys who went out and ran it a few months ago, but I can assure you and your readers that whenever we do go out and go fast, we will have full transparency in everything that we do,” Hennessey says, noting the test car alone will have five GPS tracking systems inside it and that representatives from the laser-timing system company will be on-site as well, to certify the results. “For us, it’s not so much about a big marketing thing to say we went the fastest-the [high speeds] are just built within our DNA. We’ll have all the data out there, and then the public can decide whether they feel like that is good enough information for them.”

AstraZeneca is seen as a
Read More

A Mugging-Style Cyber Attack That Hit A Stock Exchange, Yes Bank, Others