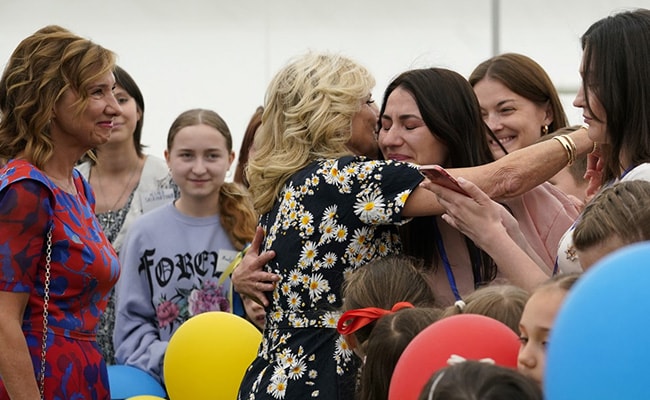 Nearly 910,000 Ukrainians have fled to Romania since Russia launched its invasion

Sitting in a classroom in the Romanian capital of Bucharest, US first lady Jill Biden met a group of Ukrainian refugee mothers and educators on Saturday, praising the women for their strength and resilience.

Svitlana Salamatova and Anna Sushko, both founders of non-governmental organisations (NGOs) focused on women’s issues and education, fled the Ukrainian capital of Kyiv soon after Russia invaded the country on February 24.

Another of the women, Anastasiia Konovalova, left her home in Odesa with her toddler son. Svitlana Gollyak and her 8-year-old daughter hid in a basement in the bomb-shelled city of Kharkiv before heading westwards and on to neighbouring Romania.

Despite their ordeal, the women quickly looked for ways to use their skills to help fellow refugees, setting up a kindergarten and several classrooms for Ukrainian children in Bucharest with help from local NGOs, volunteers and officials.

“I crossed the border with my three-year-old son and everything I was thinking about was how to save my child from a city that was bombed,” Konovalova told Biden, herself a teacher.

Biden, who teaches English and writing at a community college in Virginia, is on a tour of Romania and Slovakia meeting U.S. servicemen deployed in the countries, and refugees.

Nearly 910,000 Ukrainians have fled to Romania since Russia launched its invasion, with charities, local authorities and government agencies working alongside thousands of volunteers to provide food, shelter and transportation.

While many have already journeyed further, about 80,000 remain in Romania, primarily women with young children.

“Only now I understand how important an educational space, not just an education, is,” Salamatova said. “Our women have time to organise their lives.”

Konovalova said they have 900 children on waiting lists for their Ukrainian classrooms.

“They don’t want to leave this country because they want to stay close to the border and as soon as it’s safe we’re going back … having made a good friend (Romania),” she added.

The wife of President Joe Biden was accompanied by Romanian first lady Carmen Iohannis, who is also a teacher.

“I think mothers will do anything for their children,” Biden told the Ukrainian women. “I think you’re amazingly strong and resilient.”

The first ladies also met Ukrainian and Romanian children who were drawing their hand prints on paper printed in the colours of their countries’ respective flags.

“The world is so open now, that we have no borders for our hearts,” Sushko said.