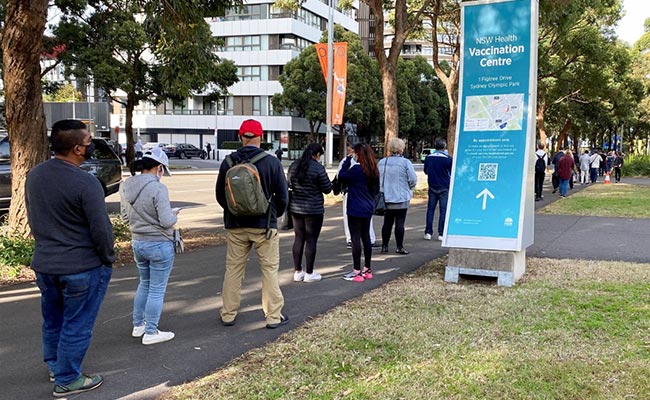 Central Sydney and its popular eastern beaches around Bondi were ordered into lockdown Friday as authorities try to contain an expanding outbreak of the highly contagious Delta variant of COVID-19 in Australia’s largest city.

Sixty-five coronavirus cases have been reported so far in the flare-up linked to a limousine driver infected about two weeks ago when he transported an international flight crew from Sydney airport to a quarantine hotel.

But authorities have since identified scores of potential infection sites visited by thousands of people across a swathe of Sydney, from wealthy beachside suburbs to the city’s main business district.

Health officials have been alarmed by the rapid spread of the Delta variant first seen in India, noting instances of people passing on the virus during fleeting encounters in shops and then quickly infecting close family contacts.

Premier Gladys Berejiklian of New South Wales state, which includes Sydney, called it the “scariest period” since the pandemic broke out more than a year ago.

On Friday, she ordered anyone who lived or worked in four eastern and central Sydney neighbourhoods to stay home for at least a week, only venturing out to purchase essential goods, obtain medical care, exercise, go to school or if they are unable to work from home.

The restrictions, estimated to affect around a million people, included central business district workers over fears that commuters were potentially spreading the virus into other parts of the city, Berejiklian said.

“We’ve done better than expected in terms of contact tracing and getting on top of all those links,” she said.

“But what this does is make sure that we haven’t missed any chains of community transmission.”

An earlier ban on Sydneysiders leaving the city was also extended until next Friday, as traces of the virus were detected in sewage in the far-flung outback town of Bourke, about nine hours drive northwest of Sydney.

‘Sydney Has Not Faced This Before’

It was a dramatic development for a city that had returned to relative normality after months of recording very few local cases.

But residents appeared to largely take it in stride 16 months into the pandemic.

“To be honest, I probably think that it should have happened a couple of days ago because there’s been a pretty decent spread the last few days,” said Bondi local Alana Trepper, 40. “But it is what it is,” she added.

“People have to sacrifice their personal freedoms at this stage,” another local, Michael Frydman, said as he walked along Bondi Beach.

“We’ve had a pretty good so far. There’s been a lot of cases recently and they’re trying to get on top of it.”

“The Delta virus is different; it is being transmitted far more easily,” Khorshid told media in Canberra.

“Sydney has not faced this before.”

He particularly criticised the failure to include in the lockdown the households of people who work in the affected Sydney areas but live elsewhere, noting the high degree of viral spread to family members.

Korshid warned that although the economic impact of a lockdown was hard, a wider outbreak could be “catastrophic” for the whole country.

It is the latest in a string of snap “circuit-breaker” lockdowns across major cities around Australia, with most cases linked to returning travellers held in hotel quarantine.

Australia has been among the world’s most successful countries in containing Covid-19, with just over 30,000 cases and 910 deaths in a population of about 25 million.