RBI intervenes to defend rupee, ready to do more: Report

India’s central bank is intervening in all foreign-exchange markets and will continue to do so to protect the rupee that slid to a record low Monday, said a person familiar with the matter.

The Reserve Bank of India sees its foreign-currency reserves of about $600 billion as a formidable stockpile that it will put to use against speculators, the person said, asking not to be identified as the deliberations aren’t public. The RBI is seeking an orderly depreciation, the person said.

The rupee dropped as much as 0.8% to an unprecedented 77.53 a dollar on Monday, as foreigners continue to pull money from Indian stocks. Surging inflation and the prospect of aggressive monetary tightening is roiling emerging markets, and a surprise rate hike by India’s central bank last week hasn’t been able to stem the currency’s decline.

“Interventions by RBI have been small and sporadic today,” said Anil Kumar Bhansali, head of treasury at Finrex Treasury Advisors. The central bank has sufficient reserves, they could sell another $50 billion also, but they may prefer to keep those reserves for bad times, he said. 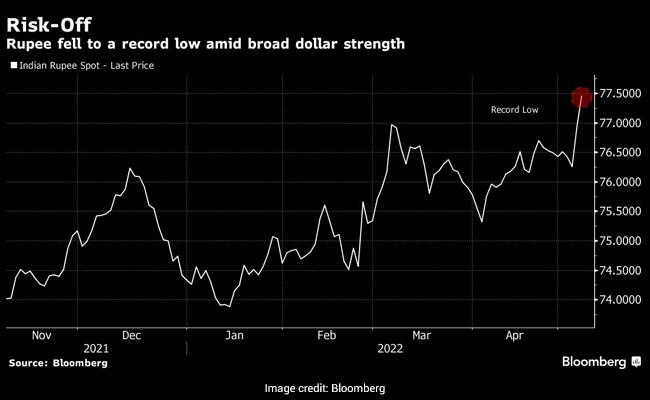 The rupee’s sharp slide is unfounded because India’s exports are robust and growth recovery is on track, the person said. That gives the RBI confidence that levels seen before the latest plunge are in line with fundamentals.

The RBI intervened in the spot, forwards and non-deliverable forwards market on Monday, the person said. The RBI sees pressure on the rupee from a weaker yuan and stronger dollar, rather than domestic reasons, the person said.

India relies on imports to meet about 80% of its oil needs and elevated energy prices threaten to quicken inflation and widen its current-account and trade deficits.

“It’s clearly about dollar strength, as well as a function of oil,” Ashhish Vaidya, head of treasury and markets at DBS Bank Ltd. in Mumbai, said on Bloomberg TV. “As far as oil is buoyant, the rupee will continue to be under pressure.”

Latest data showed that the reserve pile had dropped below $600 billion for the first time in a year.

–With assistance from Ronojoy Mazumdar.