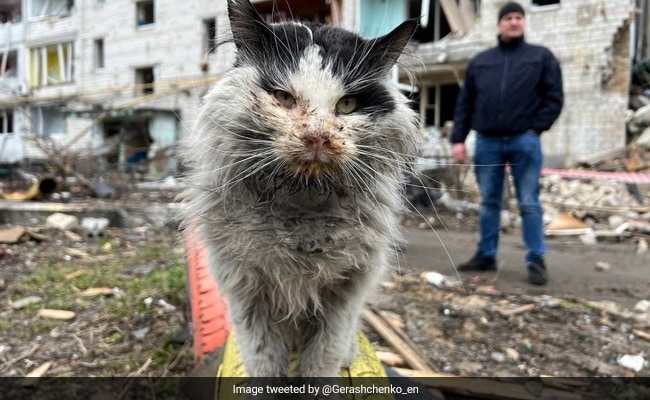 The cat which survived the Russian attack in Ukraine’s Borodyanka.

A cat that stayed alive during Russian army’s attack in the Borodyanka area of Ukraine has been adopted by the war hit country’s Ministry of Internal Affairs. This was announced by Anton Gerashchenko, the Adviser to the Minister of Internal Affairs of Ukraine, on Twitter.

“Remember the survivor cat from #Borodianka? I was sent a happy sequel to his story! He now lives in the Ministry of Internal affairs, fed, bathed, and loved. He will participate in all important meetings, of course,” Gerashchenko said in a tweet, posting some photos of the cat.

Remember the survivor cat from #Borodianka? I was sent a happy sequel to his story! He now lives in the Ministry of Internal affairs, fed, bathed, and loved. He will participate in all important meetings, of course.#UkraineUnderAttack#StandWithUkrainepic.twitter.com/yvQYy6QljC

It was posted on Saturday, and since then, has been liked by more than 32,000 people.

“Some heartening news we & Ukrainians need rn,” said a user. “They say children are resilient, accurate but never underestimate the resiliency of cats,” added another.

Borodyanka was one of the towns in the Kyiv region which were completely destroyed by the Russians during the war, which has bene going on for 46 days. Ukrainian President Volodymyr Zelensky the situation in the town was “significantly more dreadful” than in nearby Bucha, where Russian forces’ suspected killing of civilians has been broadly condemned.

Earlier, Ukraine’s prosecutor general, Iryna Venediktova, said in the Kyiv region, which includes Borodyanka, Bucha and other towns and villages such as Irpin, the authorities had found “650 dead bodies “.

Russia has denied targeting civilians and says images of bodies in Bucha were staged by the Ukrainian government to justify more sanctions against it and derail peace negotiations. Borodyanka is about 25 km (15 miles) from Bucha.

Few buildings remain standing in Borodyanka, the ones that do have burn marks running up their walls.