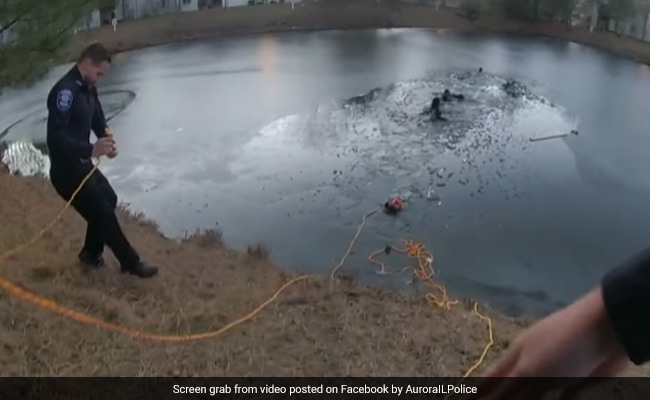 A video shared by the Aurora Police Department on Facebook shows police officers saving a drowning nine-year-old boy from a frozen pond. An adult woman who tried to save the boy was also stuck in the pond and was rescued by the police.

Police and firefighters responded to a call about a 9-year-old who had fallen through the ice and a woman who had gone to help him. The boy reportedly fell through the ice while trying to retrieve a football.

The bodycam footage shows the officers rushing to the pond with water rescue kits. The clip shows two officers then jumping into the water and rescuing the boy and the officers standing outside the pond try to pull them out of the icy cold water.

Since being posted, the video has amassed 63,000 views on Facebook with 2,100 likes and several comments. Social media users are lauding the officers for their heroic acts. A user wrote, “Amazing job! They acted without hesitation and knew exactly what to do to get the job done. Great job to all the Officers/APD!!”. Another user wrote, “Well done APD! Very Thankful for all of you that serve and protect!”

The third user commented, “God Bless the brave woman who jumped in to try to save him and all of the Police. This could have been a very sad Thanksgiving! Great job!”