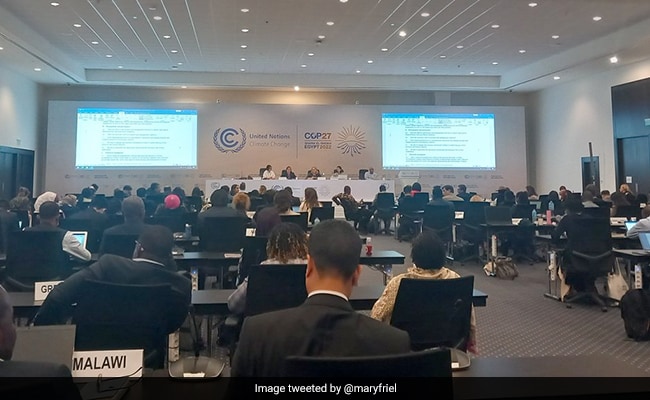 The United Nations published a first draft of the climate deal on Thursday and it doesn’t mention a phase down of all fossil fuels, a proposal that was put forward by India and supported by the European Union and many other countries.

The draft encourages “the continued efforts to accelerate measures towards the phase down of unabated coal power and phase out and rationalize inefficient fossil fuel subsidies, in line with national circumstances and recognizing the need for support towards just transitions”.

Nearly the same language was used in the Glasgow Climate Pact last year.

When contacted, a spokesperson of the Environment Ministry said the Indian negotiators do not wish to comment “as negotiations are going on”.

The cover text also doesn’t mention when a loss and damage finance facility will be launched and what its contours will be.

Poor and developing countries have demanded that the COP27 concludes with a decision to launch a fund to address loss and damage — a term used for irreparable destruction caused by climate change-fuelled disasters.

The 20-page document, described as a ‘non-paper’ by the UN Framework Convention on Climate Change, is 8,400 words long as compared to the Glasgow pact, which was around 4,600 words and was in itself one of the longest cover texts in the history of UN climate summits.

India had proposed on Saturday that the talks wrap up with a decision to “phase down” all fossil fuels and not just coal.

EU Vice President Frans Timmermans told the media on Tuesday that the bloc would support India’s proposal “if it comes on top of what we already agreed in Glasgow”.

Citing the Sixth Assessment Report of the Intergovernmental Panel on Climate Change, Indian negotiators had told the Egyptian COP27 presidency that meeting the long term goal of the Paris Agreement “requires phase down of all fossil fuels”.

“Selective singling out of sources of emissions, for either labelling them more harmful, or labelling them ‘green and sustainable’ even when they are sources of greenhouse gases, has no basis in the best available science,” they said.