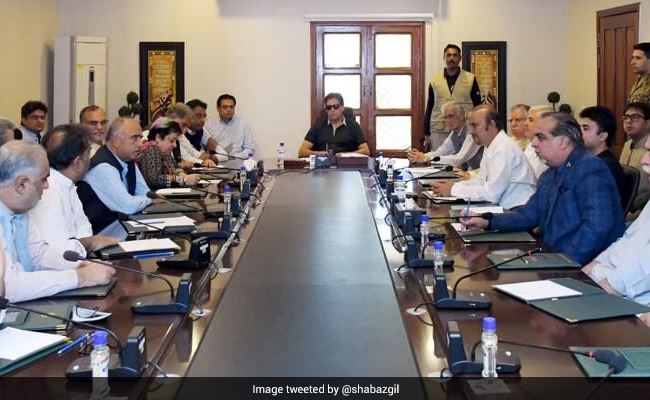 “Pakistan became an independent state in 1947; but the freedom struggle begins again today against a foreign conspiracy of regime change. It is always the people of the country who defend their sovereignty & democracy,” Mr Khan tweeted.

Pakistan became an independent state in 1947; but the freedom struggle begins again today against a foreign conspiracy of regime change. It is always the people of the country who defend their sovereignty & democracy.

The former PM today chaired a meeting of the PTI’s central core executive committee (CEC) in Bani Gala to discuss the future course of action as the cricketer-turned-politician appears to continue his brinkmanship and cling to power at all cost.

Senior PTI leader and former information minister Fawad Chaudhry has announced that his party would resign from the National Assembly tomorrow (Monday) if the party’s reservations regarding PML-N President Shehbaz Sharif’s nomination as the prime minister are not addressed, Pakistan news media has reported.

Opposition leader Shehbaz Sharif, the 70-year-old younger brother of former three-time prime minister Nawaz Sharif, has been nominated as the joint candidate for the prime minister’s election, scheduled on Monday.

A special court of Pakistan’s Federal Investigation Agency is likely to indict Mr Sharif and his son Hamza in a money laundering case on the same day, according to reports.

“It has been decided that we can’t be involved with these thieves and dacoits in the assembly. Everyone decided with a unanimous consensus that we are going to resign en masse from the NA,” Pakistan newspaper Dawn quoted him as saying. “All members will resign.”

Calling the opposition a party of “thugs, robbers and looters”, former Interior Minister Sheikh Rashid said that he can’t sit in the assembly alongside them. “There will be a meeting at 9 pm tonight and I will address the public at 9:30 pm,” he said.

The joint opposition – a rainbow of socialist, liberal and radically religious parties – secured the support of 174 members in the 342-member assembly in a dramatic vote last night and ousted PM Khan, who became the first PM in the country’s history to be removed by a no-confidence vote.

The PTI-led government had filed a review petition in the Supreme Court challenging its decision to declare the ruling of the deputy speaker to dismiss the no-confidence resolution against the Prime Minister as unconstitutional. The petition, however, is yet to be filed since the officers of the court did not process it on receipt as they close early in Ramazan. It is likely to be admitted on Monday.

PM Khan had in a late-night address a day before the no-trust vote called on the people of Pakistan to hit the stress in a non-violent protest against an “imported government”.